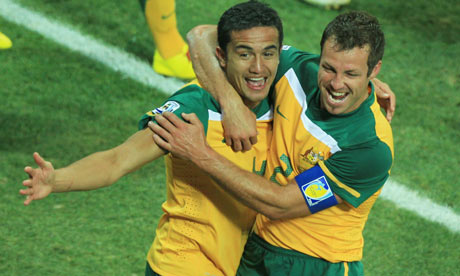 A superb battling performance from Australia against Serbia was not enough to qualify for the knockout phase of the World Cup as Germany and Ghana progressed from Group D.
Get Out Your Calculators
There were all sorts of mathematical permutations going into this game, with Australia having to win, then rely on a winner to emerge from the Ghana/Germany game. If Germany were to be victorious however, the Aussies would need a five goal swing to finish ahead of Ghana in second spot. A defeat for the Socceroos and they would be off home while Serbia claimed a spot in the next round.
Cometh the hour….
….cometh Tim Cahill. Harshly sent off in the opening group game, the Everton man returned to the starting lineup for this one, and was played in his preferred position off the frontman. Cahill spent the Germany game with his back to goal was horribly ineffective. This time he was able to start from deep and make penetrating runs into the area to attack the ball. One such run led to him connecting perfectly to a cross and his typically towering header found the net. The goal galvanised the team and not long after, substitute Brett Holman picked up the ball on half way and ran forward twenty yards, before arrowing a superb low shot into the corner of the net. The Socceroos pressed forward but a Marko Pantelic consolation, coupled with Germany’s 1-0 win over Ghana, meant their efforts were to no avail.
Hindsight – How Wonderful
The Germany game cost Australia massively, and Pim Verbeek’s decision to abandon his tried and tested 4-2-3-1 formation resulted in a 4-0 thumping that was always going to be extremely difficult to recover from. Verbeek was man enough to admit his cock up after tonight’s game, but it is of little consolation to a nation who now have to enjoy the rest of the tournament minus their side. In that game, both Cahill and Jason Culina had their games ruined by being played completely out of position in unfamiliar roles. Neither Mark Bresciano or Harry Kewell played despite being declared fit, and it was clear to even the most casual of observers that the players were not comfortable playing a 4-6-0. Thankfully Verbeek managed to see the error of his ways and things returned to normal for the Ghana game. However again a spanner was thrown in the works, this time thanks to a red card for Kewell on twenty minutes for deliberate handball on the goalline. His dismissal, coupled with Ghana’s conversion of the resulting penalty, left the Socceroos in trouble, despite taking an early lead. They held out for a draw but could have snatched all three had Luke Wilkshire been more comfortable in front of goal.
Verbeek will now step down from his post in charge of the team, and unfortunately the decisions against Germany will form a massive part of his legacy.
Germany progress as group winners and will now face England in a mouth watering last 16 clash, while runners up Ghana are to take on Group C winners USA.
The Socceroos meanwhile, can go home with their heads held high, knowing that it was really only some questionable managerial decisions that cost them.
Roll on 2014!

Which Australian has gained the most from the A-League?

0
Many Socceroos got their start in the A-League before becoming stalwarts of the national team. Which former – or current – A-League regular has gained...
Read more
Asian Cup

Who is the greatest Socceroos coach ever?

0
Since playing their first international match nearly 100 years ago in 1922, the Socceroos have had more than 30 coaches lead them through friendlies,...
Read more
Adelaide United

0
When professional players decide to call it a day, they can be presented with multiple career opportunities. Two of the more high-profile career paths for...
Read more