Sydney FC in tournament against Rangers, Blackburn and AEK 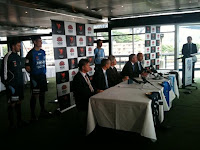 In what is to be called the ‘Sydney Festival of Football’ International Club Tournament, Sydney FC has announced another major coup for both the club and A-league. Sydney FC confirmed their involvement in the inaugural four club tournament today, to be held at the Sydney Football Stadium from the 25th to the 31st of July.

It is yet another fantastic bid to entice new fans to the club, and also a chance for Sydney FC to test their newly rebuilt A-league squad against quality international opposition. The three international teams involved, Scottish Premier League firm Glasgow Rangers, English Premier League side Blackburn Rovers and Greek Super League club AEK Athens, will no doubt provide some excellent football at the SFS, aided by the revolutionary new points system; on top of three points per win and one point per draw, teams will also win one point per goal.

“I think we will be quite competitive, having home advantage… the boys will be buzzing” Alex Brosque told TheFootballSack.

”[The one point per goal rule] is good; it will create very attacking football”

Edwin Lugt stated “We’d all be happy with a sell-out… there will be a special price packet for Sydney members”. When queried as to new signings, Lugt replied “We hope to announce a striker in the next 2-3 weeks…not from Australia”.

All international teams are contractually obliged to bring their full strength teams, and this will hopefully draw a legion of Greek, English and Scottish fans living across Australia. Tickets have been purposefully priced to be highly accessible to the public, starting as low as $29. Six matches will be played in the form of 3 double headers, on 25th 28th and 31st of July.

The tournament is hoped to be a stepping stone to Sydney winning the right to host the World Cup in 2018/2022. In the same week as the Festival of Football, FIFA delegates will be in Sydney to discuss Australia’s World Cup bid.

The event is being organised by the New South Wales Government, through Events NSW. It comes on the back of comments made by NSW Premier Keneally in regards to the Grand Prix:

“I said we would start a new drive to bring more and more international events to Sydney – to keep NSW and Sydney the events capital.”

“Major events showcase the very best of our state to national and international audiences, which provides significant benefits to the State’s tourism industry – an industry that supports 165,000 jobs and contributes more than $28 billion to the economy each year,” Ms Keneally said.

What Sydney FC need to change for next season

With the curtains now drawn on a largely underwhelming 2021/22 A-League Men campaign for Sydney FC, it is time to look at how the...

With the 2021-22 A-League Men finals now well and truly underway, here at The Football Sack we like to investigate the teams who missed...