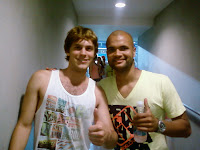 Adelaide United tonight secured a 2 nil win over local side Adelaide Galaxy in what was their first run this pre-season. The Galaxy, who play in the South Australian Super League, gave away goals to frontman Sergio Van Djik, and Argentinian import Marcos Flores.

Phil Stubbins, United’s assistant coach, was happy with the way his team dusted off the cobwebs in the hit out.

“Obviously in the first half we put out a select first team and it was very encouraging on the eye, and I think the mentality and the objectives that we’ve been driving over the course of pre season were witnessed in the first half and we really played with some attacking intent.”

“I thought most of the boys were fabulous in their efforts and although the score line was only 2-nil, it was a very confident and positive performance, and very encouraging.”

“To witness tonight what we’ve been trying to instil in the course of the pre season in terms of getting the ball down and playing football, I’m hoping that other people will talk about the style of football that was played tonight.”

Adelaide United’s next test will come at home against Wellington Phoenix on July 16th, in what will give both teams opportunity to size one another up for the season ahead. Tickets for the Reds’ match against Wellington are available through Ticketek (call 132 849, online at www.ticketek.com.au). Kick-Off is at 7.30pm.

“It was a very useful exercise for us and I’m pleased that we managed to give a lot of our players some decent game time,” said Bleiberg after the match.

“The idea was to try a few different things tactically and to put some match fitness into the players, so all in all we’re very happy with how it went.

“There was a very good turnout of supporters and I’m sure they will have enjoyed some of the football that was played. Credit to Palm Beach too – they were very competitive and gave us the kind of match we were looking for.”

It was a surprising, yet sensational season for Adelaide United, as they went agonisingly close to a fourth grand final appearance.   http://gty.im/1240848991 Season summary  Not many...

Is the pressure back on Melbourne City after failing to defeat yet another top-four side?

The defending A-League Men champions will host Adelaide United at home on Sunday with their semi-final tie poised at 0-0 aggregate, yet the pressure...