TFS Team of the Week: Round Six

It’s a little later than usual this time, but the Team of the Week is back, though it is feeling sligtly naked without the presence of Shane Stefanutto. 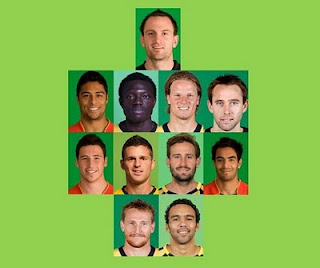 Stefanutto’s mantle as a mainstay in the best eleven of the week has now been passed on to Adam Leckie who put in another great performance for league leaders Adelaide United in their win over the Jets. Leckie’s team mate Marco Flores also takes his place in midfield in large part due to his stunning individual goal that will be tough to beat as the best of the season. Eugene Galekovic makes it a trio of Adelaide players in the team as he was in excellent form to restrict the Jets to just one goal which came from a horrible defensive error.

Socceroo Jason Culina was responsible for Gold Coast United’s only goal in their surprise win over Perth Glory at nib Stadium and he completes the midfield. Fellow Gold Coast man Adama Traore was easily the best player on the park in that game, and he was one of the first names on the team sheet.

Another player finding the back of the net in spectacular fashion was Nick Ward who recently joined the Wellington Phoenix on loan from Melbourne Victory. The 25 year old former Queens Park Rangers midfielder bagged his side’s winner in the 2-1 win over Sydney FC. Paul Ifill is another Phoenix representative after he enjoyed a real return to form in the same game. His flair and trickery were constant thorns in the side of the reigning Premiers.

The Football Sack’s favourite number 2, Daniel McBreen, was on the scoresheet for the Mariners in their win so he takes the other forward spot.

Honourable mentions go out to both Carlos Hernandez and Matt Thompson, both of whom narrowly missed out on selection.