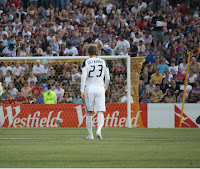 David Beckham and his Galaxy side crashed to their second defeat to A-League opponents, going down 2-1 to the Newcastle Jets in the Qantas Challenge on Saturday night.

The streets of Newcastle were more like Hollywood in the lead up to the match this week as most hotels booked out and media flooded into New South Wales’ second largest city.

Local newspaper and radio saturated the Hunter with ‘Becksmania’ in the lead up to the Galaxy’s arrival, which included a month long ‘Becks watch’, while the name ‘David Beckham’ was hot on the tongue of every Novocastrian.

Once in town, the Galaxy players checked out the city ranked ninth on Lonely Planet’s top 10 cities for 2011 and mingled with locals on Darby Street and at a kids coaching clinic run by the players.

Australian celebrities, including Silverchair, booked their seats for the match, while speculation over the state of the pitch added to the hype of the estimated 2 million dollar match organised by Nathan Tinkler.

The community kept their end of the bargain as a full house of 23,317 turned out at EnergyAustralia Stadium to witness the star studded event that will be a once in a life time chance for some.

A match billed to entertain, Landon Donovan delivered almost instantly when he got the scoring underway after some confusion between Jets’ players Taylor Regan and Matthew Nash in the seventh minute.

The soft goal didn’t deter the Jets as they shaded the first half’s play and pulled a goal back courtesy of a clinical strikers’ finish from Sasho Petrovski in the 39th minute.

Labinot Haliti sealed the win for the Jets in the 52nd minute when he collected a through ball from Kasey Wehrman and easily brushed aside his marker to slam the ball in the back of the net.

While lacking the intensity of a competition match, there was still plenty of passes to admire and emotions to meander through with several players from both sides going close to scoring on a number of occasions.

Beckham showed glimpses of his best throughout the match and went close to scoring when he sent an outside of the foot shot whizzing past the far post in the first half.

The fact that Beckham lasted the entire 90 minutes carrying a back injury was a testament to his character and determination as a person.

Beckham conducted himself as an absolute professional and gentleman in the post-match press conference where he revealed that in normal circumstances he would not have played; the toll of the match visibly evident as he limped out of the room after the interview.

While the performance wasn’t spectacular, the form from David Beckham all-round was vintage as he threw his playing shirt into the crowd at full time, the true entertainer leaving a warm and lasting impression on the Hunter community.