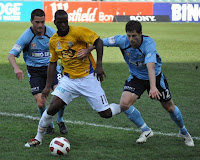 United hadn’t lost since August and despite losing Shane Smeltz at the beginning of the season, have looked reasonably solid sitting comfortably in 4th position on the Hyundai A-League table.

Gold Coast United have lost just ten of thirty-nine games in their A-League history but interestingly, despite accumulating points regularly this season, yet have not named the same side in successive games at any stage this season. United coach Miron Bleiberg seemingly emulating Claudio “Tinkerbell” Ranieri during his time in charge of Chelsea in the early 2000s.

The Sky Blues opted for a 4-5-1 with Captain Terry McFlynn and Young Socceroo Rhyan Grant in holding midfield positions whilst Lavicka decided to play Shannon Cole in an advanced position when Dimitri Petratos had impressed in the previous game against the Newcastle Jets when coming on in the second half.

After a cagey opening for both sides, United Captain and Socceroo midfielder Jason Culina found veteran Joel Porter with a reverse pass whose bent run had split centre backs Stephan Keller and Hayden Foxe. Porter was given the benefit of the doubt in the offside call and took the shot first time. The attempt went through new two year contract recipient Ivan Necevski when a parry looked a reasonable outcome and United were up 1-0.

Necevski proved he had woken up minutes later in being alive to the further Porter foray. The striker again lost Keller on the edge of the area but the Sydney ‘keeper got off his line well to smother the ball from the advancing run.

After sharing the balance of play, at least in terms possession, for much of the first half, Jason Culina went from provider to goal scorer when a well placed shot through traffic put Gold Coast up 2-0 on half time. In truth Ivan Necevski again will be hard on himself for having poor footwork in goals.

As the players left the field of play, the game was really only one team’s to win. Gold Coast were playing well and Sydney’s exodus affected squad had only scored more than one goal away from home on one occasion this season, at lowly Perth.

When Gold Coast stretchted the Sydney FC defence one time too many and scored straight after the restart, Sydney were consigned to being second best over the 90. Joel Porter’s goal was his best Hyundai A-League strike and he certainly had it all to do when Stuart Musialik left him alone at the top of the box. Porter’s favoured left peg launched the leather into the roof of Sydney’s goal and from distance too; a superbly taken opportunity by a veteran performer.

The Sky Blues were able to pull one back as the game approached the hour mark. Scott Jamieson lost his marker, skipped into the box and found Hirofumi Moriyasu on the edge of the area who slapped a swerving shot with the outside of the boot on goal. United keeper Glen Moss did exceptionally well to parry the drive onto his own post but the rebound fell directly to Bruno Cazarine who tapped in to become the joint top scorer in the league this season.

The game finished 3-1 to the home side whom are building some excellent midseason form on a foundation of unerring consistency. The visitors look a one or two season job to build up the depth of the squad to where it was prior to the exodus in the off season. Despite having patches of promise in the second half going forward, the issues in defence will take longer than this season to resolve.