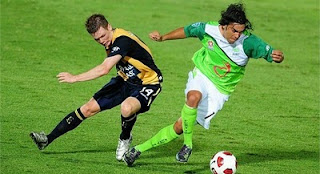 A Patrick Zwaanswijk header was enough to give to the Central Coast Mariners all three points in their clash with the North Queensland Fury tonight, and the game was not without its controversy.

The Fury were outraged when referee Gerard Parsons turned down appeals for what appeared to be a stonewall penalty in the last minute when David Williams was bundled over in the area by Mariners keeper Matthew Ryan.

“I thought so but you have to ask the referee,” said Fury coach Franz Straka when asked afterwards if he thought it was a foul.

“I am disappointed, frustrated after this game especially after second half the three points are gone. It’s a pity but the team fought really well, they did everything they could.”

Even Mariners coach Graham Arnold admitted that the Fury were unlucky not to have been awarded a spot kick.

“I have not seen the replay but from where I was sitting it looked like it was (a penalty) but they even out over the season,” he said.

Central Coast were the better side early, but Michael McGlinchey failed to convert a chance after a rare error from Mark Hughes. Shortly afterwards 17 year old Mustafa Amini tested Fury keeper Justin Pasfield from distance but his effort was too straight and was easily saved.

Mariners striker Daniel McBreen almost broke the deadlock when he lifted the ball over Pasfield but his goal bound effort was superbly cleared off the line by Andre Kilian. Their pressure finally paid off on 36 minutes when centre half Patrick Zwaanswijk rose highest to head home from an inswinging corner.

Williams continued to be the most dangerous player for the home side after the break and he fired another shot goalwards that flew just over Ryan’s crossbar. Ryan had to be at his best to deny Isaka Cernak’s superb long range effort in what was to be the Fury’s last real chance to claim a point.

The Mariners managed to hold on for the win in front of a disappointing crowd of just 3,625 at Dairy Farmers Stadium, though they will be relieved not to have conceded a penalty late on.

Subs: S Usai, B McDonald, U Talay, I Cernak.