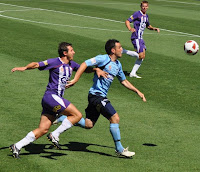 Sydney FC have given themselves every chance to make the final six in this year’s A-league after scoring two goals in the final 15 minutes to sink Perth Glory.

Perth looked set to escape with a scoreless draw until Shannon Cole scored in the 75th minute, which was closely followed by a goal from Alex Brosque in his 100th appearance for the sky blues.

A crowd of 6654 fans made the trek west to Parramatta Stadium to witness what was a lackluster performance from Sydney for the majority of the contest.

The victory lifts Sydney out of the cellar, and gives them a glimmer of hope for the finals.

Although Sydney put two goals past the Glory, it could be said that they lack the x-factor which is being displayed by other teams around the league at the present time of the season.

And although you wouldn’t bet against a side like Sydney – particularly with the stock due to return – it would appear to be an uphill battle for Lavicka and his men from here on in.

An athletic Shannon Cole pounced on a clever pass from Brosque to calmly put the home side in front going into the final portion of the match.

Brosque was the next to drive one home as it made the performance from Sydney look more dominant than it actually was.

Hirofumi Moriyasu’s pass sent Brosque on a run in which he only had Perth keeper, Tando Velaphi, to beat.

A fitting reward for a player who has been the shining light in Sydney throughout his career.

A tired and careless Glory had nothing to show for their troubles, and were clearly frustrated with outcome.

Brosque was brought down by Brent Griffiths in a sloppy challenge whilst on route to goal.

Griffiths was shown a red card and the Glory were forced to finish the contest with only 10 men.

Sydney seemed to play themselves into a bit of form late in the match, the hot and humid conditions at Parramatta stadium could have been the form finding match they need heading into the remaining rounds of the season.

The Glory sent a chance begging when a soft header from Michael Baird gave defender Terry McFlynn all the time in the world to clear the ball from under the crossbar.

Although Sydney seemed to have bounced back from their 3-1 loss to the Gold Coast the previous week, the standard at the bottom of the ladder is clearly lacking.

It’s a disappointing time for the Glory, who started the season with such promise.

It seems they still have a lot of work to do even after their encouraging victory the previous week.

Corica frustrated by strikers and referee in Macarthur loss