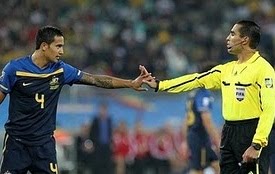 There is a cliché in sport that you are only as good as your last game, any Australian cricket fan who watched this summers Ashes series will testify to that – once mighty, now meek.

It is important then that Football Federation Australia learn from the mistakes of Cricket Australia. Australia were defeated by England in the Ashes because the tourists were better prepared. You could argue that England had a better squad of cricketers to pick from, but that is because the England and Wales Cricket Board developed those players, and brought them through the ranks.

Development in Australian cricket has suffered in recent years because the national team became too reliant on the likes of Warne and McGrath to get the job done. England, whilst we were winning easily, were being beaten, but, as we now know, they hold the Ashes, and on this summer’s showing, may hold them for a while.

FFA needs to make sure that they learn from their cricketing counterparts. Australian cricket’s ‘golden generation’ was just that, a once in a lifetime team. However, as brilliant as they were on the park, it was detrimental off the park, as a generation of talent watched on from the sidelines, starved of the challenge that comes with international competition and as such were not prepared when thrown to the wolves upon the mass retirements of half that great side at the end of the 2007 Ashes series.

We are now coming to an end of Australian football’s golden generation. The likes of Kewell, Schwarzer, Neill and Bresciano have done Australia proud. Ten years ago if you had offered an Australian football fan a snapshot of where the game is in this country now, with two World Cup appearances on the board, they would have been overjoyed. And so we should be.

It has been a wonderful decade for football in this country, but it is now a new decade, and time to look forward, not back. A time to take great care that we do not repeat the failings of Cricket Australia in bringing through the next generation of Socceroos to become the nation’s heroes.

Australia has the oldest squad at the Asian Cup. An average age of just over 31 for the starting eleven against India was certainly not too old, but it is important that the average age of our starting eleven for our 2014 World Cup opener is not a tad over 34. It is vital that young talent is given a chance soon so that they can play with the Kewell’s and Cahill’s and learn from them before they are gone.

Tommy Oar, Nathan Burns and Matthew Spiranovic should all be playing more regularly for the national team than they are. Never before in the history of Australian football has there been a more crucial time to develop our next crop of players. For the first time in the game’s history in this country our youth breaking into the team have a solid foundation to stand on. We must not waste that.

Spiranovic and Newcastle Jets’ Ben Kantarovski could be our centre back partnership for the next two World Cups. How good a starting base would that be, to have that kind of stability. When Craig Moore and Tony Popovic were solid together, the Socceroos were solid together.

In the striking department, Australia desperately needs to unearth a diamond from the rough. Kennedy is solid but has not really gone on to fulfill the high hopes many had of him following his breakthrough at the 2006 World Cup in Germany. Statistics can often be misleading, but for all his hard work, Scott McDonald’s 23 international appearances without a goal are a damning stat. Kewell, Cahill and Holman are all attacking midfielders, not strikers.

Holger Osiek has taken an experienced squad to the Asian Cup because he wants to win it. And so he should. You should take your best squad available at the time to every major tournament. And this is a major tournament. However, at its conclusion, thoughts must immediately turn to which names will fill the 23 man squad list for the 2014 World Cup in Brazil.

Here is a possible eleven to walk out for the opening group game of the 2014 World Cup, should we qualify.
Mitch Langerak in goal, a back four of Wilkshire, Spiranovic, Kantarovski and Carney. A midfield of Culina, Cahill, Holman and Oar with Burns and Rukavytsya up front.

What do you think?

After a rocky qualifying campaign, the Socceroos fate will be decided over the next fortnight. Following four consecutive appearances at the World Cup finals, Australia...

After a thrilling 1-0 victory over Western United, another teenage sensation from Central Coast Mariners was in the spotlight for the second week in...

Kisnorbo not accountable for denying Good a Socceroos call-up

Melbourne City coach Patrick Kisnorbo says he followed all the rules in refusing to let defender Curtis Good join the Socceroos for their World...