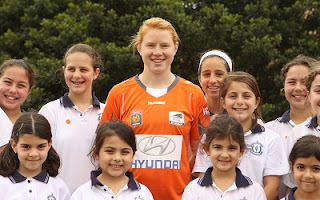 For the third year in a row we are preparing for a Grand Final in the Westfield W-League. It’s not something we have spoken about as a group but you get the sense around training that everyone is extremely proud of each other for consistently producing results when we have really needed them. Over the last three seasons we have only lost a handful of games, which shows the character of our team.

I couldn’t be prouder of the girls and I want nothing more then for every one of them to experience what it feels like to win a Grand Final. The exact same thing is true for Sydney FC stand in captain Kylie Ledbrook and her team. Sydney FC could become the first women’s team to win back-to-back Grand Finals and that is a feat that is amazing in itself.

The rivalry between Brisbane and Sydney stretches back well before the beginnings of the Westfield W-League and could perhaps be getting stronger and stronger (if that’s possible). With both teams boasting a large number of Westfield Matildas, the Grand Final is set to be a cracker. Not only is the status of Champions up for grabs, but with the World Cup in Germany sneaking up extremely quickly this game is the perfect opportunity to make an impact on the national team coach in order to push for selection in the World Cup squad. Performing in big games is where it matters and there is no bigger stage in the domestic competition than the Grand Final.

Coming off an exciting win in a penalty shoot out against Canberra, we have moved our focus to the Grand Final on Saturday. We have done everything in order to recover from the marathon game as fast as possible and everyone is excited about the prospect of a championship win.

Grand Final week is always exciting but at the same time it can be an intense week; most of our players have experienced Grand Finals previously and we will be looking to help out those who haven’t been involved before.

One of these players is our stalwart defender Kim Carroll.. Kim suffered a serious knee injury in round 6 of season one and therefore missed out in playing in the season one Grand Final and subsequently missed the whole of season two. I have played with Kim for over five years now and there is nothing that she deserves more than a W-League title. Lisa DeVanna is another notable player who has not experienced a Grand Final.

Sydney has been the league favourites all year and who could dispute that. With Leena Khamis and Kyah Simon firing up front, Kylie Ledbrook and Renee Rollason controlling the midfield and youngsters Teigan Allen and Caitlin Foord as exciting up and comers, they are a tough team to break down with strengths all over the field.

However, we boast a host of players who are more then capable of shutting these players down. Kim Carroll and Elise Kellond-Knight are two of Australia’s best defenders, Aivi Luik and Lauren Colthorpe can shut down even the best midfiled and with strike forces up front like Tameka Butt and Lisa DeVanna, we have more then enough quality to combat any assault.

We know how they play and they know how we play. The winner of the Grand Final will be the team that is able to execute their teams’ game plan with precision and discipline. The team that is clinical in front of goal, with composure in the final third, taking advantage of their opportunities will go along way to winning the game.

Regardless of the result, it is sure to be a spectacle not to be missed. With exciting players on both teams, there is sure to be not a dull moment in the game. 90 minutes of pure entertainment is what a Grand Final should be. The Grand Final will be played at Campbelltown Stadium on Saturday at 3pm and will be shown on ABC 1 at 3pm.

Enjoy the Grand Final and I hope you have enjoyed reading my blog this season.

Clare is a girl with a strong passion for football and the women’s game in particular. Captain of W-League side Brisbane Roar, Clare is also a current Matilda. Catch the W-League every week at your local ground, or if you can’t make the game watch it live on ABC1. To read Clare’s other columns for The Football Sack, click here!