Launch of the NSW Premier League 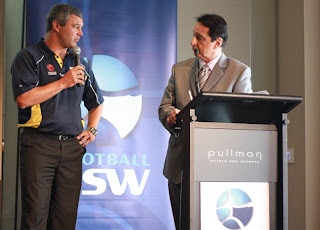 Football NSW along with a collection of players and coaches from all twelve clubs yesterday launched the 2011 season of the New South Wales Premier League.

The competition kicks off on the 26th of March but the game to watch is on the 27th. Favorites and reigning Premiers Bonnyrigg White Eagles are up against NSWPL newcomers Parramatta FC who were promoted from the NSW Super League last season after winning the 2010 premiership. Bonnyrigg coach Brian Brown made it known his only focus was this opening game but he must have aspirations of back to back titles for his side which he claimed are ‘even stronger this year’.

It was a jovial atmosphere with club representatives mixing freely with each other and media to discuss the looming season. A number of new signings were announced including the much publicized move for Sasho Petrovski from Newcastle Jets to South Coast Wolves. Petrovski won a championship ten years ago with the club and returns to the Illawarra to settle down with his family.

Other notable signings this year in the NSWPL are Mark Rudan (formerly Adelaide United) and Ante Tomic (Melbourne Heart) who both return to Sydney United, with former North Queensland Fury captain Ufuk Talay joining also the red and white.

Manly have recruited players from across the globe with two Koreans, one French, an Irishman, a Scotsman and an Englishman. The imports come with much expectation but are an unknown quantity – it will soon become apparent whether coach Craig Midgley (who took over from now Central Coast Mariners Assistant Coach Phil Moss last season) has recruited well or not.

Product of the Football NSW Sydney FC youngster Terry Antonis was a special guest at proceedings, his career story truly representative of how the Premier League is a breeding ground for local talent. Rising A-League stars Bernie Ibini and Matt Ryan, both formerly of Blacktown City, reinforce the NSWPL’s reputation as being a nursery of talent.

2011 will no doubt prove to be an exciting contest and is promising to be one of the most hotly contested seasons of Premier League football yet.

This season The Football Sack will be reporting several NSWPL matches a week, along with a range of match reports from state leagues across the country. Subscribe to our RSS feed to receive match reports and a whole lot more.