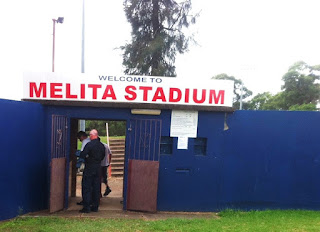 An upset was on the agenda at Melita Stadium after Parramatta FC opened the scoring against Bonnyrigg White Eagles and led for most of the match on Sunday afternoon. A brace from Fabien Iacovelli was not enough to give the 400 fans a home win after Nathan Elias equalised seconds before the final whistle.

The teams could not be separated in their opening fixture of the NSW Premier League with two goals apiece providing plenty of entertainment for the vocal supporters. Reigning premiers Bonnyrigg lined up in an attacking 4-3-3 whilst Parramatta decided on a traditional 4-4-2 to begin the match.

The first real action of the game resulted from good build up play by Bonnyrigg in the 15th minute which included a nice individual run from Nathan Elasi. The run led to a cross from the left of field then headed back into the penalty area which was unfortunately not picked up.
Moments later Elasi was in the action again, on goal after a chip over the top of the Parramatta defence however his strong attempt went over the bar.
The White Eagles then had a second audacious shot from well outside the box predictably fail to draw a save from Parramatta ‘keeper Tom Romic. Neither attempt, earlier Spruce and then Al Rikaby, were on target however they were early indicators of the dominance Bonnyrigg would have in attack.
Iacovelli had Parramatta FC’s opening shot for the match and didn’t fuss about, giving the home team a one nil lead on 20 minutes. Against the run of play a ball from Dizdaric ran across the face of goal for Iacovelli to obligingly tap it in.
Bonnyrigg kept pressing and Boardman only had to chip the ‘keeper to level the scores but Romic stood tall to deny him. Despite Romic’s save it was to be the big number nine who would put Bonnyrigg on the board and on 30 minutes he blasted home.
The scoreline wasn’t to stay equal for long however as Iacovelli went one on one with the Bonnyrigg goalkeeper Zabaks, successfully held off his defender and put a decent strike past him. 2-1 would be the score at half-time, Parramatta allowing their counter-attacking play do the talking.
The second half opened similarly to how the first ended with Bonnyrigg enjoying sustained periods of pressure and Parramatta happy to wait for the counter. The home side were satisfied with their one goal advantage and heaped numbers behind the ball for the second 45 minutes.
A wonderful save from Tom Romic kept Parramatta in the match after a shot from Al Rikaby was stuck at the top right corner. Romic was later carded for time-wasting as he sought to aid his club maintain their surprising lead.
In the 64th minute Iacovelli could have wrapped things up for Parramatta and secured his hattrick in the process. Needing only to tap the ball past the ‘keeper after a square ball saw him in acres of space Iacovelli struck the ball over the post.
But it was not to be for the home side, Bonnyrigg White Eagles proving football is a game of 90+ minutes. Nathan Elasi finally got on the scoreboard with the last play of the match. After three minutes of stoppage time Elasi latched onto a cross to the far post, dashing Parramatta’s hopes of an opening round win against their favoured opponents.