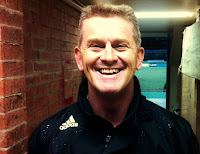 In a wet encounter at Melita Stadium on Sunday afternoon Parramatta FC drew 1-1 with Blacktown City to see out round three of the NSW Premier League. A penalty late in the game cancelled Blacktown’s second half advantage in a match hindered by heavy rain and poor pitch conditions.

Around 350 patrons saw the home side struggle to test City goalkeeper David Bradasevic and on 70 minutes new recruit Mitchell Duke gave Blacktown the lead. Duke, who as recently as last season played for Parramatta, struck the ball across the ‘keeper and into the bottom of the far net.

Brian Dene’s men were no doubt relieved when Kataiba Elrich was pulled down inside the box on 78 minutes. Chris Camilleri converted the spotkick to level the scores, a slow run up enough to deceive the Blacktown ‘keeper.

An almost wonder strike from Michael Brown could have clinched a deserved victory for City in the dying stages of the game, a 30-yard volley toward the top corner equaled by Parramatta’s second string goalkeeper Anthony Costa. First choice ‘keeper Tom Romic picked up a knock to his ankle midweek and promoted Costa stepped up well to stave off a Blacktown outfit looking for their first win of the season.

Former Sydney FC squaddie Adam Biddle made a late appearance for Blacktown City and showed his talent has not diminished since his stint in the Hyundai A-League. A powerful volley in extra time was superbly stopped by the Eagles FC ‘keeper and the score would remain one all at full time.

Blacktown City coach Mark Crittenden was unhappy with his team’s first point of the season.

“We created ten or eleven quality goalscoring opportunities to none. I don’t think my ‘keeper made a save to be honest.

“No, not happy at all. People say a point’s a point but no we should have walked away with all three.”

Coach for the home side Brian Dene feels his team’s start to the season is all but miraculous, with two points from three games adequate in his books.

“But it was tough and we were out of sorts I think for most of the game. We needed to settle down and we did that around the 35 minute mark.

“You do want to start winning. But you’ve got to remember these boys have come up from Super League last year and Blacktown have been in the league for how many years now? They’ve got some hardened characters out there who’ve played premier league football and know lots about it.