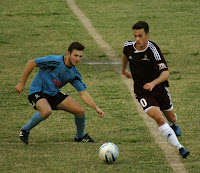 QAS continued their good form from last week to post their second win of the season, beating Bundaberg 5-0 on Sunday afternoon.

The win sees Academy reach the fourth spot on the QSL ladder.

Despite the convincing 5-0 victory, QAS coach Darren Davies said the score could have been even better.

“Realistically with the chances that we had, we should’ve actually scored more goals. I’ve said to the boys now that we’ll work on our finishing again this week,

“I’m happy winning at home, I’m happy with three points on the board, I’m happy, very happy, to be in the top four over Easter,” Davies said.

From start to finish QAS looked the more professional side.

Displaying immense improvement from two weeks ago, when they last played at Meakin Park, Academy were composed in possession, desperate in defence and relentless in attack.

Up the right wing, Alistair Quinn was setting up several chances, with accurate crosses only narrowly missed by the forwards in the square.

So it was no surprise that Quinn set up the first goal in the 11th minute, delivering a pin-point cross to a sliding Elliot Ronto who put away goal number one for Academy.

QAS were putting on all the pressure up front, while Bundaberg could only manage half-chances.

Nevertheless trailing at 1-0, Bundaberg were desperately trying to put something together by trying to maintain possession, but were nowhere near as controlled in possession as QAS.

Just before the half QAS notched up two quick-fire goals in the 41st and 43rd minute respectively.

Jacob McLean weaved his way down the left, into the box, and appeared to have spent too long with the ball, but kept his composure to pass it off to Quinn who was waiting to put it easily in the back of the net.

Elliot Ronto then backed up for his second goal of the day, pouncing on a cross from the pacey Brandon Borello on the left wing. QAS 3-0.

Bundaberg would have to come up with something special to come back from the three goal deficit after the half.

But they looked tired in defence, and weren’t putting any pressure at all, on Academy’s players.

Spirit’s Laurie Stephenson tried in vain for a miracle goal from way out. From the edge of the goal square, his curling penalty kick only just missed left of the goal. So close, yet so far.

Spirit looked uncertain in attack, despite the midfield’s constant effort to move it up into the QAS half by launching it deep. 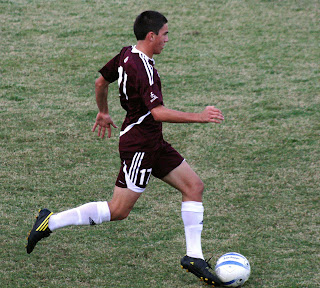 Then in the 81st minute when substitute striker Kwame Yeboah found space to knock in QAS’ fourth goal, the game was most certainly over.

Though just like last week’s defeat to Brisbane Strikers, the Spirit didn’t give up, and kept attempting that elusive goal. Commins Menapi’s work down the left led to a cross which was almost put away moments later, but the QAS defence and on-song ‘keeper Matthew Acton, ensured they didn’t concede.

Brandon Borello then sealed a masterful win for Academy in the dying minutes. Left unmarked he was able to score a soft header to make the final score 5-0 for Academy.

With a hard-fought loss last week, going down to ten men for most of the match, the Bundaberg players appeared tired and were struggling to keep up with Academy. Bundaberg coach Tony Roebuck, tried to explain why,

“We’ve been working hard at training and we’ve had some tough games and the travel always makes it tough as well. But I don’t want to make any excuses,” he said.

“We had a few opportunities there but it’s a game of chances, and if you don’t take your chances it makes it very difficult.”