But for Roar defender, Shane Stefanutto, it seems like only yesterday they were holding up the A-League plate.

He explained the feeling after last year’s incredible final, which saw Brisbane come back from 2-0 down in extra time, to force a penalty shoot-out and win the title.

“Even now that we’re champions, still every day, I can’t believe it. It’s just great. The feeling will last for a bit longer yet, though I think the boss will kick that out of us pretty soon,” Stefanutto chuckled.

That ‘boss’ is of course the one and only Ange Postecoglou, the coach and mastermind behind this young side’s success last season. But Postecoglou is ready for more. In fact he demands more.

“The time we had off was good but we’re certainly ready to come back,

“We want to get better. We set a decent benchmark last year for us as a club. But I think the most important measure is the way we play and we want to improve. So that’s all we’re focussing on,

“Winning the competition and all those kind of things will take care of themselves. I think we’ll be in with a good chance if we can play better than we did last year,” Postecoglou said. 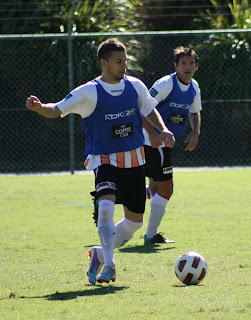 At present, the Roar’s squad is a couple players short but their coach is not worried.

“We’re pretty happy with our squad. We probably need a couple of additions but at this stage we’re in no rush to do that and we certainly aren’t talking to anyone. We’re going to take our time and make sure we get the right people to bring in,”

Earlier in the week Socceroos captain Lucas Neill denied rumours that he was considering a move to the A-League. When questioned about whether the Roar would’ve been interested in Neill, Posteoglou heaped praise on the Galatasaray star.

“I think Lucas is good enough to keep playing overseas for another couple of years,

“Lucas would be a fantastic addition to any A-League team, but he certainly hasn’t come across our radar,” the coach said.

This may be disappointing news for Roar supporters, but that’s what is unique about this Brisbane team. They have that underdog confidence. They believe in their ability to win despite a lack of internationally renowned marquee signings, and they have shown that it can be done with great success. 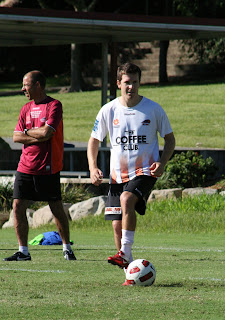 Last night, in a family friendly Q & A, fans got to meet a handful of Roar players at the Queensland State League match at Perry Park, featuring the Brisbane Strikers and Gold Coast Stars.

Former Brisbane Striker, Stefanutto, jumped at the chance to give back to his local club.

“Three of us (Roar players) have come through the Brisbane Strikers. That’s where I started and where I learnt my football education. I’m more than happy to go back there and show that it is possible to go from that league, to play A-League and maybe even for your country,” he said. 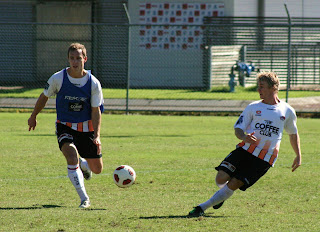 The overwhelming support for Brisbane was visible at the orange-soaked Grand Final in Suncorp Stadium last season. Just a few months after floods had ravaged the area, it was a testament to how far Brisbane football had come.

Stefanutto believes Brisbanites are some of the most passionate supporters around; a quality enhanced when a team is winning.

“I’m not surprised with the support we’ve gotten,

“It’s always been the case that when you’re winning, people will come and support you. Brisbane is very much like that. We’ve got successful sporting teams so they come and support winners and they expect winners. So now it’s a great opportunity for us to get the people back that may have left us. It starts right now, and it starts at grassroots,” he said.

Stefanutto knows that if they are going to keep their coach, fans and club happy, the winning will have to continue, and the players ensure no less than that.

“Our aim is to play a good brand of football, to entertain, to win and be the top team,

“Reputation means nothing. I don’t think any team has defended their championship, so it’s no use worrying about what we did last year. It’s about what we do this year now.” 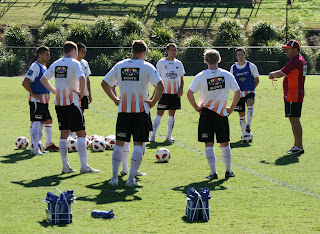