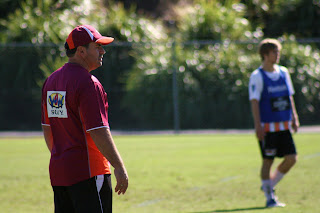 Brisbane Roar and Central Coast Mariners fans will not have to wait long to see a re-match of the 2010/11 Grand Final thriller which saw the Roar come away with the A-League trophy.

Listen to the latest episode of the podcast.

Central Coast looked the likely winners in front of the 50,000-strong crowd at Suncorp Stadium that day, before Brisbane managed to claw back two goals in extra time forcing a penalty shoot out.
But the Roar will be out to prove that it was no fluke when they face the Mariners on October 8 for their first home game of the 2011/12 season.
CEO of the club, Eugenie Buckley is excited for the re-match and hopes it will ignite a fierce rivalry between the two clubs.
“Fans in Brisbane will still feel the excitement and euphoria from that amazing match on March 13 and it is the ideal platform to launch our championship defence,” Buckley said.
“We’re very excited and hope the fans are too.”
In the first three weeks Brisbane are set for some monster clashes. Starting with the Mariners in week one, they will then travel into enemy territory to face Sydney FC in week two before a blockbuster local derby against Gold Coast United the following week.
The Roar will also have a tantalising match up for New Years Eve, taking on Melbourne Victory at Suncorp.
Buckley is certain this particular game will draw a big crowd.
“The New Year’s Eve clash with Melbourne Victory allows us to create a major event around what is one of our marquee fixtures for the season,” she said.
For Brisbane coach Ange Postecoglou, the 13 home games at Suncorp Stadium will give fans plenty of opportunities to see their champion team play.
“Our fans were amazing last season and were an important part of helping us to turn Suncorp Stadium into a fortress,” Postecoglou said.
“For the players, it’s very important to maintain that regular contact with our home fans.”
Home games for Brisbane will include seven Saturday matches, two Sunday matches and four Friday night games.
The 2011/12 Hyundai A-League draw has come under some criticism, especially in regards to what officials are calling a “midweek marathon,” which will see some mid-week games in January played back to back.
But overall, many, including Postecoglou, agree it is a vast improvement from previous seasons.
“I think it’s a fair draw for everyone.”