W-LEAGUE: Glory off the mark as Arnold shines 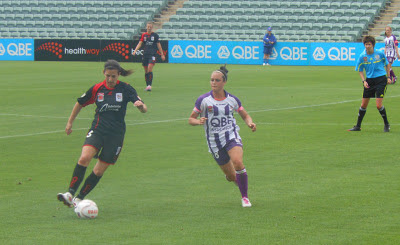 Perth Glory picked up their first three points of the Westfield W-League season with a come from behind 2-1 win over Adelaide United at NIB Stadium today.

Afterwards coach Jamie Harnwell was delighted with the attitude of his players and the character shown to recover from conceding early on.

“It was a pretty scrappy goal that we conceded but a great finish by the girl but we knew what we wanted to do and we knew how we wanted to play, and we did it,” he said.

“We look like scoring goals now which we didn’t in the first week so that’s a very pleasing part.”

The visitors went in front as early as the third minute when Racheal Quigley connected with a Marijana Rajcic cross to score a spectacular overhead kick but the sides were level again just three minutes later when a scrappy free kick fell to Erika Elze and she finished past Kristi Harvey.

Rajcic’s strength caused problems for Glory centre halves Tanya Oxtoby and Katie Holtham throughout the game but the striker never really looked like finding the net.

Glory began to take control of the game and had a number of chances to go in front with Emma Kete firing just wide from Shannon May’s cross before Katarina Jukic and Holtham both had shot blocked in the area following a goal mouth scramble.

Donna Cockayne fired over the angle of post and crossbar for Adelaide but it was the home side who went into the half time break ahead when Jukic latched on to a deflected Kede shot to round Harvey and roll the ball into an empty net. 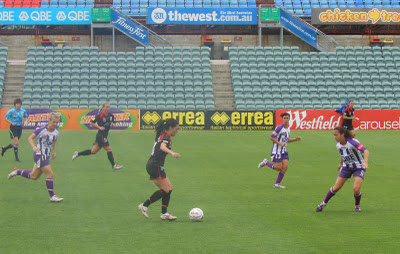 Glory were good value for their lead and almost went further ahead two minutes into the second period but Kete’s curling shot from the left went just over.

It was around the hour mark that Glory keeper Mackenzie Arnold started to become an influence in the game.

Having been commanding on crosses throughout, the Young Matilda pulled off a number of stunning saves to deny Georgia Macri, Abby Erceg and Racheal Quigley. The save from Quigley in particular, a strong armed parry over the crossbar, drew rapturous applause from the crowd.

Rajcic had a late chance to rescue a point for Adelaide but once again Arnold was equal to the task, while at the other end Glory were unlucky not to have been awarded an injury time penalty when Elisa D’Ovidio was pulled down in the area.

“It probably the performance wasn’t quite what we’re looking for but it’s always good to get your first win. We’ve set out that we want to win all our home games and that’s the first step of that.”

The boss also took time to praise his goalkeeper Arnold following her superb performance between the posts.

“She’s been fantastic every game so far this season,” he said.

“We didn’t know too much about her coming in being from Brisbane but she’s a confident young girl. She commands the box well and she lets defenders know what’s going on as well. I’m very happy and lucky to have her here.”

Both sides face Brisbane Roar over the next couple of weeks, though Glory don’t play in Round 4 due to the bye.