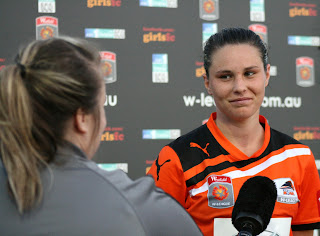 Two late penalty goals from Lisa De Vanna helped Newcastle Jets to an unlikely 3-2 win in their entertaining Westfield W-League hit-out against the Brisbane Roar on Saturday afternoon.
The Jets’ general at the back, goalkeeper Melissa Barbieri said the hard fought win was well deserved in the end.
“I’m a bit upset with the goals we conceded but I’m also really impressed with how the girls dug deep to come away with the win,” she said.
“It’s just one of those things in football that you can never say die, and it’s the mentality of how our team approach the game.”
When asked whether the win was just the result of good fortune, Barbieri insisted there was a lot more to it than that.
“It’s lucky because they’re penalty goals, but it’s not lucky because we got ourselves into a good position in the 18-yard box,” she said.
Coming off a solid 3-0 victory against Adelaide last week, Newcastle look the goods from the kick-off, winning most of the possession in the early stages. Unsurprisingly, it took no time at all for newly signed Jets striker Lisa De Vanna to test out her former teammates in the Brisbane defence. 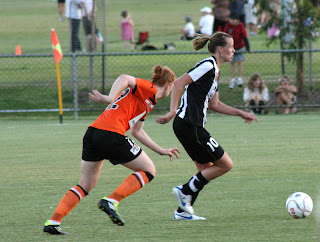 Despite Newcastle seemingly establishing the upper hand in the match, Brisbane kept coming at them, producing a nice passage of prolonged attack before an 18th minute strike from Emily Gielnik, gave the home side a 1-0 lead.

But Newcastle came back from the deficit in the best way possible. Minutes later a confident build up led by German import Arianne Hingst through the middle, forced the ball down the left. A well placed cross then caught the Roar defence flat-footed as Tara Andrews waltzed in to slot in the equaliser.
The Roar hit their stride just as the first half wrapped up, peppering the Jets goal. But each time, the ever-reliable Matildas goalkeeper Barbieri, was there to see off any danger.
After the break the Brisbane girls picked up where they left off, setting up excellent opportunities to break the deadlock.
Then in the 55th minute, Emily Gielnik reproduced the magic of her first half strike, with a screamer from a tight angle right of goal beating Barbieri to the top left corner.
Brisbane kept up the pressure, with Sasha McDonnell, Tameka Butt and Clare Polkinghorne linking up with some crisp passing as they advanced toward goal at every chance. 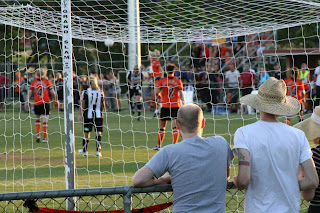 Then in the 72nd minute came the game-changer.
From midfield the Jets sent the ball inside the Brisbane area for De Vanna to run onto at pace. But sliding in for the ball also came the Roar ‘keeper Casey Dumont, who accidently collected De Vanna in the process.

Without hesitation, referee Kate Jacewicz pointed to the spot and awarded the free.

The drama did not end there with Dumont controversially red-carded for her effort. With the 500-strong Cleveland crowd still voicing their discontent, substitute goalkeeper Hoshimi Kishi couldn’t defend the ensuing De Vanna penalty kick which levelled the scores once again. 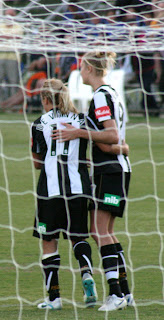 Not long after conceding, De Vanna was lining up her second of the afternoon after Roar defender Karla Reuter was caught out handballing in the box.

Without raising a sweat De Vanna scored from the spot kick sealing the 3-2 win for the visitors.

With the formerly orange-clad De Vanna being the hero Newcastle, Emily Gielnik summed up the feeling within the team.
“We’re not very happy at Brisbane Roar to see her leave our team and put two against us.
“It’s a bit unfortunate,” she said.
As Brisbane’s only goal scorer on the day, Gielnik said the defeat was hard to swallow.
“I definitely felt that we deserved the win.
“We had everything going for us. We’re on a beautiful pitch, we played good football. But just with some of their goals, they got really lucky.
“But there’s nothing you can do about it at the end of the day,” she said.
The loss now sees the defending champions sitting second last on the Westfield W-League ladder, while Newcastle chalk up two from two after their bye in Round 1.
Brisbane Roar:
DUMONT, Casey. ALLEWAY, Laura. POLKINGHORNE, Clare. SPENCE, Brooke. BURGESS, Joanne. SPINA, Ashley. BUTT, Tameka. POPOVIC, Vedrana. McDONNELL, Sasha. GIELNIK, Emily. BEAUMONT, Ellen.
Subs:
REUTER, Karla. CANNULI, Catherine. HARCH, Lana. KISHI, Hoshimi.
Newcastle Jets:
BARBIERI, Melissa. KENNEDY, Alanna. HUYNH, Alex. BOLGER, Nicola. SIMON, Gema. O’NEILL, Linda. ANDREWS, Tara. VAN EGMOND, Emily. DE VANNA, Lisa. DAY, Stacey. HINGST, Ariane.
Subs:
BREWER, Hannah. KOFOED, Monnique. DOBSON, Rhali. LOGUE, Alison.