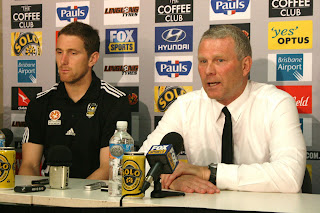 Wellington Phoenix had an unlikely victory within reach at yesterday’s Hyundai A-League fixture against Brisbane Roar, holding the defending champions to a 1-1 result away from home
“When we came in at half time I think we thought ‘yeah, we’ve given ourselves a real chance’,” said Wellington’s Chris Greenacre.
It wasn’t to be, but the end result was certainly something to be proud of for the Phoenix.
Posting just a solitary win so far this season, Greenacre said the draw was just what the doctor ordered to get his team back on track.
“It’s pretty lonely seeing ourselves on the bottom of the table this morning,” he said.
“For the boys to come out with a performance like that, hopefully that’s a springboard for us to do well next week.”
In the first stages of the match it seemed as though 16,428 cheering fans at Suncorp would be seeing another Brisbane Roar walkover. Besart Berisha scored in the opening ten minutes off a Thomas Broich free kick outside the box and then had another goal of his disallowed minutes later for offside.
But from there Phoenix toughed it out. They played aggressive, pressing football against their much more fancied opponents and crowded the danger area when the Roar advanced. In fact Wellington were rarely seen in their attacking half of the pitch. But it didn’t matter. They took their best chance of the afternoon and made it count, with Tim Brown scoring off a Nicholas Ward cross in the 36th minute.
Though Brisbane kept coming at the Phoenix, threatening to break the deadlock with each movement forward, the visitors stood strong to keep the home side goalless in the last 58 minutes of the game.
The added setback of losing Daniel Sanchez moments before kick-off mounted pressure on Wellington’s younger players, but Phoenix coach Ricki Herbert could not have been prouder of his team’s performance on the day.
“You know things have been tough for us over the last five or six weeks and I can only implore the group tonight for being outstandingly resilient,” he said.
“Having bounced back by a goal against the best by a mile in the league, is great character.
“It might give us a little spring in our step too and I think you need that confidence to keep you moving forward.”
Roar coach Ange Postecoglou wasn’t fazed by the draw, believing his side played well. Really well.
“We certainly created enough opportunities tonight to win the game of football. There were times tonight when I thought we played our best football of the year,” he said.
The only thing Postecoglou said they were lacking, was a bit of luck.
“We just didn’t get a reward tonight,” he said.
“They played really well. The keeper pulled off a couple of good saves. We still had a couple of very good opportunities.
“Sometimes they just don’t go in.”
Postecoglou said it might be easy for people to say his team were frustrated at Wellington defending well, but that’s not how he sees it.
“Sometimes that’s how people analyse games,” he said.
“They look at the end result and work back from there. But what we do we don’t do for praise, but because we think that’s what will make us a successful football club.”
At fulltime many were heralding the draw as more like a loss for Brisbane and a win for Wellington.
But the fact remains, the Roar sit atop the ladder and extend their undefeated streak to 34 straight Hyundai A-League games, while Wellington sit at second-last on equal footing with Gold Coast United.