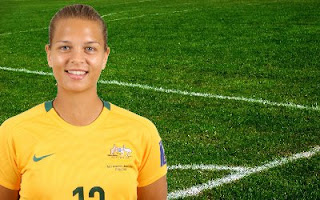 The team bus ride home from our nil all draw against Canberra was about twice as long as the trip down, or so it seemed, the disappointment of not winning looming over us like a bad smell.

With the aid of some lollies and after a pit stop at McDonalds we arrived at Liverpool just before midnight. A very sketchy car ride home entailed with some very loud music and a slap in the face to wake myself up – what a long day. I woke up in my home on beautiful Bondi beach, walked across the road and jumped in the ocean. Ordinarily an experience that can wash away any sins from the night before, but it didn’t seem to work for me this time post match. Let me recap on the weekend.

We got to Canberra well before the game and hung out at a pub for a meal and then headed to the football club across the road from the field to watch the W-League game between Brisbane and Adelaide live on TV before walking over to the change rooms to start preparing for the game. The sun was quite stifling at Deakin even for a 5pm game.

Sydney FC started strong and we took the reigns by having several shots on goal and one particularly sweeter than the rest,s aimed right for the top corner of the goal but parried by Lydia Williams who glided up through the air to effortlessly to hit it over the bar. I believe that came from the boot of Caitlin Foord who was giving the Canberra defense hell on the left and right flank, clearly back into form she will continue to terrorise the defense with her speed and quick touches on the ball.

We seemed to be controlling the game for the first 20 minutes or so, shifting the ball to the left and right sides of the pitch and then penetrating through the midfield when a gap opened up – text book football. But when a goal didn’t come the momentum shifted Canberra’s way and we were under pressure with Ali Lipsher making some exceptional saves of her own.

The next 50 minutes were a display of two formidable sides having it out in front of a great crowd. At half time ice towels were handed out in the change room to bring down players core temperature while Staj (coach) gave the run down on his take of the game so far. There was not a lot to fault us on he said, it was just a plain good game of football with both teams playing really well. He gave a couple of tactical suggestions and sent us off to finish the game.

The girls ran back out and Walshy and I came on with about 25-30 minutes to go. I and was placed at left fullback. After a momentary shock to the lungs with a few long sprints to attack and recover I was covering my ground as we kept pressing for that goal. Then something unexpected happened. Servet Uzunlar was booked for the second time. We all knew what was going to happen before the ref had even finished blowing the whistle for the foul. Out came the second yellow, then the red and we were down to ten players.

If anything we lifted in tempo and intensity. I was moved to right back and Heather left back. For the next 15 minutes it seemed we were just attacking with Canberra making a few breaks but nothing we couldn’t deal with. I still remember getting a nice ball passed over to me which Leddy kindly stepped over for me to receive while virtually unmarked. I scanned the field, was nearly at the top of the box and really could have pumped one towards the goal like I had been doing in the warm up but my defensive instinct kicked in and I second guessed myself. Instead I sent it into the crowded penalty box but cut it back too far, one of our players got it and reworked it back into a goal scoring area but to no avail. After you play a specialized defensive position for so long you can lose your offensive instincts in that kind of situation. As a younger player I probably would have just smashed it at the target and not given it a second thought.

We worked away tirelessly but after what seemed like a marathon of extra time we still didn’t get on the score card. The plus side was neither did they, however our fate is now out of our hands. We have to win the next few games and depend on certain results to go our way to win the comp.

Last Friday morning session ASADA showed up – unannounced as they usually do. A 6am drug test is not the most desirable way to start your day. Especially when you have a job to rush to after training. The old ‘pee on demand’ has always been a humorous event to those that aren’t involved and even then the whole situation can still be quite funny. Having a complete stranger watch you go to the toilet would be some people’s worst nightmare. I guess after so many experiences you become desensitized, but then you do feel sorry for the younger girls and try to make them feel relaxed about it.

One way of making light of it was on a tour to China a few years ago. We were immensely bored, as you can be while in China on tour. One of the team’s comedians, lets call her Sarah Walsh, decided to make a practical joke out of the urine sample cups that we are given before games to monitor hydration levels. Often you have to deliver your sample to the treatment room which usually has a herd of girls loitering around getting treatment or watching TV. So sometimes you will have to do the walk of shame with your sample in hand past your team mates and usually cop some banter in the process.

On this instance, Sarah had decided to fill her sample cup with yellow Gatorade and proceeded to walk past the then captain, Cheryl Salisbury who was peacefully lying on the ground watching an episode of Greys Anatomy. Sarah innocently steps over Cheryl but pretended to stumble whilst spilling some of her sample on Chez’s leg much to her absolute horror. The look on her face was priceless, she was absolutely mortified and began wiping the yellow liquid off her skin while everyone in the room looked on shocked but couldn’t resist a giggle. Sarah then proceeded to an empty chair where she sat down, crossed her legs like a lady and then opened up the pee cup and started drinking from it. This caused mass hysteria in the physio room, screams and laughter could be heard all the way down the hall.

It was only later she told them it was actually Gatorade and not a urine sample.

Key player for Westfield W-League side Sydney FC, Thea is also a current Matilda with a strong passion for womens football and the sport in general. Catch the W-League every week at your local ground or if you can’t make the game watch it live on ABC1. Read Thea’s other columns for The Football Sack.