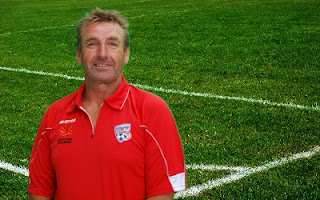 Adelaide United left the field at Hindmarsh Stadium to a chorus of boos from the home crowd after a 3-0 defeat to Perth Glory on Sunday, boos coach John Kosmina seems to believe were justified.

The Reds created plenty of goal-scoring opportunities early but after failing to capitalise they fell behind to a Shane Smeltz goal in the 14th minute.

The Adelaide faithful showed their frustration throughout as the players reverted to a negative playing style, while the lack of a finishing touch compounded the Reds’ woes.

United coach John Kosmina felt the fans were upset the team had looked so promising in the early stages but failed to put the Glory to the sword.

“They weren’t booing the football they were booing the character,” Kosmina said.

“They were booing at the fact that we caved in again after six weeks of good, solid work.”

The Reds failed to make the most of their opportunities on goal with more than half of their 18 shots failing to find the target.

The Glory produced the exact opposite as their five shots on target resulted in goals to Smeltz, McGarry and Miller which pushed Adelaide back towards the foot of the Hyundai A-League ladder just two games ahead of Gold Coast.

Perth coach Ian Ferguson praised his side’s character and good fortune as they escaped the early exchanges with the scores stuck at 0-0.

“We were very lucky. On another day Brucey [Djite] puts them away, you can be dead and buried,” Ferguson said.

The Scotsman singled out his talisman striker Shane Smeltz for praise, taking his first chance of the game with aplomb.

“When you’ve got him in your team he can score goals for fun and the one he got was great,” Ferguson said.

Kosmina felt his team lacked the ability to recover during a match after falling behind, but said it will take time for United to find the mental strength needed to bounce back within 90 minutes.

“I don’t think our guys are mentally and emotionally resilient enough that when things aren’t going right they can maintain pressure,” Kosmina said.

Adelaide now sit in ninth place on the Hyundai A-League ladder with 20 points and will face a stern test next Friday as they take on the red-hot Wellington Phoenix at Hindmarsh Stadium.

The Football Sack‘s ‘Player of the Year’ points: