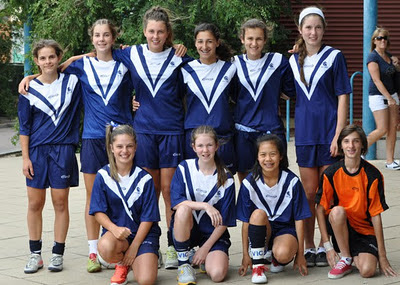 During this year’s FFA Futsal National Titles in Canberra, we will be following the fortunes of the Victorian U14 Girls team as they strive to improve on their semi-final finish in the 2011 edition. Day to day Craig Stockdale will keep you updated with a match report and photos from their latest fixture as they represent their state and sport with pride;

Finals are a different ballgame and the Vics came out with their game face on!

The girls were amazing in their pre-game warm up and knew their destiny was in their own hands. The steely looks towards parents indicated they were primed to perform tonight on the big stage and they all had a look of determination beyond their years.

Having accounted for Southern NSW earlier in the day in their final pool game (dead rubber) 4-1, the girls were keen to impose themselves again against the Southern NSW outfit.

Coach John Perich opted for the starting five of Elizabeth Sarcevic in goal, Maddie Stockdale, Lucy Kennedy, Emma Heckenberg and Dani Gudelj with a bench of girls that were just busting to get on the court and take on the opposition.

To the chant of “Let’s go Vics, Let’s Go” from the U14 Boys spectators, the atmosphere in the Southern Cross Stadium made the hair stand up on the back of your neck. Excitement, passion and emotion were evident both on and off the court.

Heckenberg shocked the arena early on by lifting a ball from the half way line to the net and through the goalkeeper’s hands to provide Victoria with the lead in the first half.

The first goal in a game seems to have an amazing impact on teams and although unconventional in its approach, the bench were up off their seats with arms raised to support the girls while those on court were relieved to have a score on the board.

‘Keeper Sarcevic pound for punch is an incredible player – and no doubt a goalie that amazes her team, coach and opposition. Petite in size but with the heart of Phar Lap, this girl throws herself across the court like no other continuously repelling opposition advances. Her hand eye coordination is remarkable and let it be said, she may well be the difference in the final run home. Half-time saw a 1-0 lead to Victoria.

The game in the second half was very physical and several players rose to impart themselves upon the opposition – Stockdale was imposing with her ability to intercept, control and hold her ground on the court and Sienna Go’s attack on the ball was a sight for all to see. She made several runs up the wing and weaved through several players to toe poke a ball into the net and bring the house down.

Alicia Vakalopoulos, Silver, Kennedy, Katrina Bellesis and Charlotte Bartyl made significant contributions to the win that has positioned the girls with a chance at writing a page in history for female futsal in Victoria.

Gudelj again was elusive, determined and relentless on her attack on goal and was rewarded with two goals in the second half to ensure a Vics win and a chance at glory.

The real shock of the day was the news that NSW Lightning beat NSW Thunder in the other semi-final and we now play Lightning in the final.

Again, Finals are a different ballgame and the Victorian girls will need to be fresh, focused and fearless in their approach later today to try and win the gold medal.

Read all of Stocky’s futsal reports by clicking here.

During this year’s FFA Futsal National Titles in Canberra, we have been following the fortunes of the Victorian U14 Girls...

During this year’s FFA Futsal National Titles in Canberra, we will be following the fortunes of the Victorian ...

Today life and futsal were put into perspective for our girls; we had news last night here in Canberra that one of our Victorian...