We are sitting on the team bus waiting to depart for the game vs Perth. Thankfully it’s not too hot in the western Australia city. The local radio station on the bus PA assuring me it was a ‘lazy Sunday afternoon’, for a second I had to get my bearings..it is definitely Saturday I confirmed whilst checking my iPhone calendar. 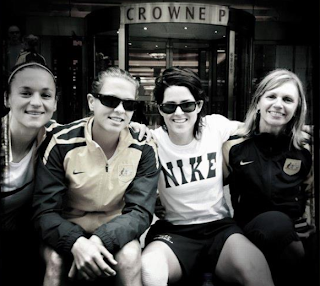 We check into our hotel late the night before after our flight was delayed. As we cruised into the driveway of the Intercontinental I wondered whether the driver had taken us to the wrong address? We all enquired anxiously whilst getting up out of our seats to check into our new prestigious pad for the next 12 hours. Our excitement was short lived and suddenly the bus’s hand brake was disabled and we started rolling past our temporary high end home. Turns out we were at the wrong place and after cruising a mere 30 meters down the road the bus pulled up to the Holiday Inn. You could here the sighs echo around the bus.

Back to game day. We marched into the changeroom at the field and immediately switched on the boom box and pumped the volume up. As the acoustics of the room made it sound like a dance party we all did our own individual routines to prepare for the game.

My routine starts with about 10-15 minutes of strapping both ankles and padding the soles of my feet with gel and tape to counter the blisters. The previous blood blisters from a couple of weeks ago have nearly all healed up. I reminisced on the last time I had a serious case while we were in China for Olympic qualifyers and I had a blood blister that became infected and caused significant pain, so uncomfortable that I had to get it injected with an anesthetic before the games while another team member had to get her knee shot up for the same reason. Holding her arm in the medical room while she took the dose from the syringe with an exceptionally large needle that pierced directly into the pain source, the cries of discomfort were clearly heard throughout the change rooms. I swallowed hard as she limped off and the doc ominously tapped the table with a cheeky grin and yelled out ‘Next!’

I watched as the thick piece of metal pierced the membrane and that was the easy part. Then the local was injected into the flesh and I could feel it spread through the ball of my foot my foot and the nerve endings in my big toe went crazy. It stung badly but I was virtually pain free afterwards. However I think I may have fractured our massage therapist’s hand from clenching it in the process!

The girls and I were given some serious last minute words from Staj before we went out to take the field. If we won this one, we’d put our destiny in our own hands.

We started well keeping possession and switching the ball along the back four from left to right; being patient until we found an opening. Find an opening we did, and the ball was played through their first line of defense with a steady build up, eventually earning ourselves a shot on goal.

The next 80 mins was quite consistent as we dominated the game and showed some Sydney FC flair with quick one touch play and clever run arounds. Kyah Simon showing off some precision dribbling and footwork while Leddy and Caitlin Foord both made effective runs that opened up the field. Youngster Chloe Logarzo came on to play in the second half and brought with her a refreshing sense of tenacity which helped us snag one more goal in the second half.

The team was overall satisfied with the 3-0 win and we went out for a celebratory meal before our red eye flight home. The team is looking fit and ready to take on the Roar in Brisbane this Saturday.

Key player for Westfield W-League side Sydney FC, Thea is also a current Matilda with a strong passion for womens football and the sport in general. Catch the W-League every week at your local ground or if you can’t make the game watch it live on ABC1. Read Thea’s other columns for The Football Sack.

Greg Downes uncovers the unheard history of women’s football in Australia by sharing in-depth, intimate stories from some of the game's pioneers. From the creation...