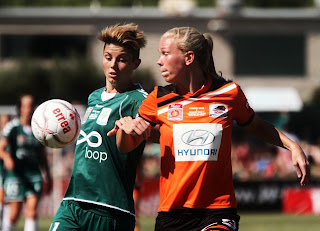 The final game of the season saw the mighty ‘Green Machine’ Canberra United who have not lost a game all year take on last season’s Championship winners, the ‘never say die’ Brisbane Roar.

As Canberra were the Premiers, this season’s Grand Final was to be at their stronghold McKellar Park on a warm sunny day. The sold out stadium witnessed one of the best first half performances ever in the Westfield W-League. New to Australian football this season, coach Jitka Klimkova led the Canberra team to their second Grand Final in the league’s short history. It is even more remarkable considering this was her first appointment in Australia. Klimkova and the only other ‘A’ licensed female coach, Melbourne’s Vicki Linton, were easily the two best coaches in the W-League this season.

It was Brisbane Roar’s fourth Grand Final in as many seasons. Quite an achievement in itself and it shows the commitment the Roar girls have against any and all odds to make the big games. Squaring off today was arguably the two best in-form strikers of the league; Michelle Heyman for Canberra and Emily Gielnik for the Roar.

Guelnik has done more than enough not to be starting off the bench for this game, but again Jeff Hopkins decided to do this. Then in a twist of fate Burgess sustained a bad injury, forcing Hopkins to inject Gielnik early and within seconds she scored Brisbane’s first goal.

For Michelle Heyman it has been a stellar year. For the second time she not only has the Golden Boot for the W-League wrapped up but is now crowned with the title of highest goalscorer across all seasons – not bad for a player who didn’t go through the elite representative programs. Heyman didn’t rest on her laurels in the Grand Final, comfortably slotting two goals home; the first a classy far post finish and the second an ‘above the pack’ header.

Heyman also assisted in Canberra’s only other goal with a nice flat cross for Ashleigh Skyes to finish. Player of the match and most likely the player of the season, Michelle was beaming.

At opposite ends of the pitch the league’s two leading shotstoppers, Lydia Williams (Canberra) and Casey Dumont (Brisbane) were duelling themselves. Dumont was annoyed early when things looked ominous for Brisbane with two goals against but she kept her composure and the Roar worked their way back into the game. Lydia did have a few more shots on target to save but Australia’s number one Matilda ‘keeper only conceded one goal in open play and a penalty to Tameeka Butt (given after Butt was fouled in the 18yd box).

The young Hayley Raso for Canberra caused problems for the Brisbane players and has a big future however showed a lack of experience when a pass to Skyes could have sewn the game up early. While Tameka Butt and Vedrana Popovic were a handful in the middle of the park for Brisbane, the usual steadfast defence from Canberra’s central defensive duo of Ellie Brush and Caitlin Cooper with holding midfielder Sally Shipard proved they are the best in the W-League.

In what was an intensive and very entertaining game Canberra held on for a 3-2 win. A well deserved result from the W-League’s first and only unbeaten side ever. Kudos must go to Brisbane for a mighty effort from the girls in orange, trading punches and taking it to a highly confident Canberra squad. A see-sawing high intensity game jam packed with good plays and good goals was a befitting end to the W-League season. Well done to all. 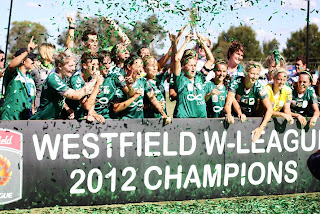