The Crossbar: Finals race heats up

With only six weeks to go before the finals, the Hyundai A-League is really starting to heat up. Victory and Sydney revived their finals hopes, the Heart missed a beat, Perth’s great run finally came to an end, and Brisbane proved they are taking their title defence down to the wire as they close in on the faltering Mariners.

Melbourne 2 def Central Coast 1
Jim Magilton finally recorded his first win in the Hyundai A-League courtesy of a return of the Hernandez show at AAMI Park after a short hiatus. Hernandez was at his Johnny-Warren-medal-winning best, his passing and long range bomb the difference between the Victory and the table topping Central Coast Mariners. Harry Kewell scored a beauty and there was some good youth on display with ‘the built for a football chant’ Jimmy Jeggo debuting, and Thomas Rogic scoring with class. We’re not sure if #ThingsMatRyanCouldStop includes a Hernandez bomb, but we suspect not! 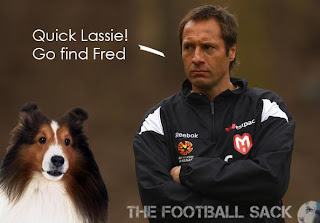 The Jets routed the Heart on Saturday with the red-hot Jeremy Brockie again leading the way for the boys in red and blue. Brockie scored his ninth of the season to move level on goals with fellow Kiwi, Shane Smeltz, in the golden boot standings. Griffiths and Bridges grabbed a goal each to seal a comfortable win for the Jets, and keeps them within striking distance of a top four berth. The Heart on the other hand are on struggle street and aren’t showing signs of finding their road directory any time soon. They are without a win in 2012 and have only managed to pick up three points from a possible twenty-four since the new year. The good news is that Lassie’s reconnaissance reports that Fred could be back as early as their next match. However, with some tough Hyundai A-League fixtures coming up, JVS will need more than a fictional Collie and a magical Brazilian to save his sinking Heart side.

Sydney 2 def Perth 1
Brett Emerton saw Harry’s performance on Friday night and raised him a packet, with his Man-of-the-Match performance in Sydney FC’s win over a resurgent Perth Glory. The small crowd was treated to a fine Emerton goal after half time, and then a headed Cazarine winner 20 minutes later, to keep the Bling’s finals hopes alive. Billy Mehmet made the last few minutes interesting when he grabbed a consolation goal, but it was Sydney’s day as news hit the ground that former favorite son, Dwight Yorke, had put his hand up for the soon-to-be vacant managers position. Jacob Burns’ yellow card came in the 15th minute, for those playing at home.

Brisbane 2 def Wellington 0
In a battle of the brightly coloured strips, we couldn’t decide whether to go with the ‘Citrus Bowl’ or the St Clements cup (Oranges and Lemons). Brisbane were fantastic and dominated possession like they have done all season. Besart Berisha got his name on the paper, and in this column, for all the right reasons this week when he scored a contender for goal of the week, though, he has some fierce competition. Mitch Nichols, who snuck back into town after getting suspended for the last Olyroos game, was subbed on with immediate effect, scoring the winner with 10 minutes remaining. The Roar were brilliant, the Phoenix not so much, and with Greenacre, Brown and Durante all coping their fifth yellows, and Ben Sigmund going down injured, they are in real trouble next week against the Mariners.

Adelaide 2 def Gold Coast 1
It was the battle of the bottom two with a crowd to match, and it was never going to hit any great heights. Nigel Boogaard scored an unlucky own goal after six minutes, while the best young talent in the league, Ben Halloran, was the only other one looking likely to score. In fact, it was an unlikely source that levelled the score for Adelaide, with Bruce Djite grabbing a goal just before half time. Dario Vidosic scored a soft winner on the hour mark, with question marks over Gold Coast ‘keeper, Chris O’Connor’s role in the goal. The Gold Coast must be congratulated for persisting with the youngsters, but they desperately need some experience for next season. If they have a next season…
Adelaide on the other hand have a hastily arranged Asian Champions League qualifier at Hindmarsh on Thursday night, but in the form they are in, we’re not sure representing Australia is good for anyone.

HAVE A LISTEN TO OUR AWARD WINNING PODCAST HERE

1. Speculation that Dwight Yorke will take over at Sydney FC. Bring back the Bling!!!

3. Brisbane Roar back to their best. Bring on the finals and Asia @joshMadden8.

4. The Football Sack trending Australia wide Friday night. We like to blow our own trumpet every now and then.

5. Our #IWantToWinACopyOfTomMeetsZizou competition, check it out for a signed copy.

What went over the Crossbar (Dislikes)

1. Melbourne Heart without a win in 2012. JVS jumping off a sinking ship?

2. The overly biased Kiwi commentators, we would rather have Peter Wilkins!!! (it’s ok, we have no NZ fans) @Cleeds24 @J_Robbz @Conway_DJ @cjpelican.

3. Victory Fans booing Leigh Broxham in his 100th game. The bloke has two championships and two premierships to his name. Show some respect.