March 6, 2012
Brisbane got a taste of their own medicine at Brisbane Stadium on Tuesday night. Schooled in possession football by a clinical FC Tokyo, the defending Hyundai A-League champions failed to impress, losing 0-2 in their first match of the 2012 AFC Asian Champions League. 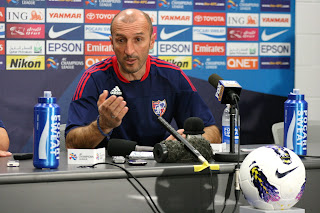 The stage was set for Brisbane to announce themselves to the world. Accepted as the greatest ever A-League team and credited for raising the bar in the domestic competition, Brisbane was the goldenchild of Australian club football.
Dubbed “Roarcelona” by fans, their debut in the Asian Champions League would reveal how good they really were and test the team like never before; against different styles, different players, and in different conditions.
FC Tokyo lined up as seemingly the first lambs to the slaughter at Suncorp Stadium (temporarily called Brisbane Stadium for sponsorship reasons). Playing at home, against a side with little game time this year and playing without their star Brazilian striker and regular captain, the odds stacked heavily in Brisbane’s favour.
Then like a big, fat, sweaty-palmed slap in the face, along came an annoying old friend; reality.
The Roar were not themselves. They were not complete walkovers, but they were certainly not at their best.
Brisbane were vulnerable at the back, and appeared bereft of ideas up front.
On the other hand Tokyo’s attack was relentless and precise while their defending was so cool and collected it could have been accompanied by a soundtrack of hits from Al Green.
The Roar tried to implement their style of play but never really got out of third gear. They couldn’t keep possession from the Japanese outfit for long enough periods. They gave the ball away too often and struggled to work it up into the front third of the pitch. We saw long balls; a rare sight at Suncorp. And when Tokyo had the ball, Brisbane took forever to get it back as the visitors wore them down with one touch, up-tempo passing, bolstered by pace and agility going forward and to the flanks.
A Yazawa goal in the final minute of injury time in the first half gave Tokyo a handy lead going into the break, and Hasegawa added one more shortly after the restart. Brisbane improved in the second half, but still never reached the quality they needed against such a classy Tokyo outfit.
Roar coach Ange Postecoglou gave one reason this might have happened.
“I thought we were a little bit nervous to start with, which is understandable,” Postecolgou said.
His reaction to the end result on the night was one of disappointment. But Postecoglou remained confident that his team still had what it takes to play toe to toe against the best in Asia.
“I always felt the first game would be the one we really got tested,” he said.
“I’m sure the players now know the level we’re playing at, and what’s required.”
In wet, slippery conditions, one man who had a busy night was Roar goalkeeper Michael Theoklitos. Though similarly let down by the loss, he too was not overly distraught about where they stand. Instead he gave full credit to FC Tokyo and was excited about what’s to come.
“You can see firsthand how great they [FC Tokyo] are. They’re quick and just know where to go. They are a very smart team, well organised and they’re all good on the ball,” he said.
“This is what we want to be a part of. We want to play these types of games and learn from them.”
FC Tokyo were certainly deserving winners.
The only thing more impressive than the performance of the team, was their coach Ranko Popovic’s epic post-match presser that was aided by tri-lingual interpreters going from English, to Japanese, to Serbian on a whim.
Popovic was pleased with his team but was equally generous to Brisbane, acknowledging their valiant effort.
“Brisbane is one of the teams that I enjoy watching. They are doing very well, but I’m teaching my players to play against this type of game,” he said.
“Without a good opponent it’s impossible to play a good game.
“But really very proud of my guys today.”
Like Postecoglou, Popovic was excited by the prospect of facing a selection of top teams from Asia, such as Brisbane Roar, and agreed that it will help develop the game – for the club, it’s players, it’s supporters and the broader football community.
The win over Brisbane puts FC Tokyo on top of the ladder in Group F of the ACL, just atop of Korean team Ulsan Hyundai on goal difference. Tokyo will next line up against Chinese prospect Beijing Guoan on the 4th of April, while Brisbane next play Ulsan Hyundai on the same date.
Postecoglou has made clear what Brisbane Roar’s aspirations are for their premiere ACL campaign – win it.
But if they are to truly have a crack, there’s certainly plenty of room improvement before they can make it to the next stage.

The curtains have officially been drawn on Brisbane Roar’s 2021/22 A-League Men season, so let’s look at how the side should be preparing for...

With the 2021/22 A-League Men’s regular season over, it is time we reviewed the performance of those clubs that failed to make the finals...

Brisbane Roar coach Warren Moon has lamented the current list of visa-players on his roster and their inability to provide the necessary spark throughout...