Graham Arnold worries about his kids 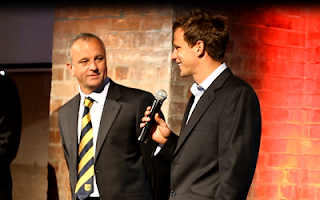 In a competition where finances are relatively low and the skill level is increasing, the most dangerous piece of artillery one can possess in the battle of the Hyundai A-League is young talent. The Central Coast Mariners possess this weapon but they are still worried.

Staring down the barrel of a minor premiership and an Asian Champions League (ACL) assault, they have enough to think about.

The Mariners’ keen development of youth has led to their status as a breeding ground for local talent, with the cream of the crop head hunted by domestic and foreign clubs alike. Names such as Matt Simon (Chunnam Dragons), Mustafa Amini (Borussia Dortmund) and Rostyn Griffiths (Guangzhou R&F) have all put pen to paper this season adding to the large list that have departed.

“We know that Asia is coming to get us and I have said it for a long time, Brad Porter is a prime example who is being offered a substantial amount of money compared to what he is getting here to play in Thailand’s second division.

The quality of youth is perhaps best displayed by the NAB Young Footballer of the Month being awarded to Central Coast players for the past four months; Bernie Ibini, Mat Ryan, Mustafa Amini and most recently Thomas Rogic have all won the award. Throughout their time in the A-League the Mariners have quietly gone about their business, and this trait has served them well thus far.

“I love going out and watching the kids perform and the ACL is so exciting because I can see how they will fair up against top flight Asian competitors and change my line up without being called crazy” said Arnold.

Despite bigger clubs swooping in on such talented youth Arnold has consistently fielded a competitive side using his homegrown “kids”.

Arnold is a firm believer in playing his youth and this season he is reaping the benefits of using what he’s got rather than looking to sign from overseas.

“Even signing John Sutton was a hard decision, I love playing the kids but there is nothing in Australia that offers the style of play he offers after Simo [Matt Simon] left”.

Despite operating under the salary cap Arnold has built a side that are contenders for the A-League title and possibly success on an international scale, with CCM playing their first ACL match tomorrow night.

When questioned after last week’s match against Sydney FC as to whether he was going to Asia looking for draws whilst focusing on the A-League, Arnold stayed true to his beliefs despite a heavy workload.

“I love turning up to work everyday and I hope the boys feel the same, I know they will give everything they’ve got and we go into every game looking to win, I will never send them out there to draw.

“Since August last year we have known about our massive schedule so rather than be frightened we have to be excited and ready to take on Asia’s best”.

Arnold’s kids are doing everything right and if the trend continues there will be few surprised to see them lift the silver toilet seat at the end of the season.