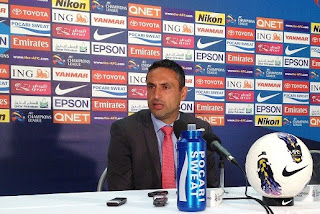 Adelaide United’s stand-in coach Luciano Trani has heaped praise on Eugene Galekovic after the ‘keeper pulled off a string of saves to help the Reds to a 1-0 win over Pohang Steelers at Hindmarsh Stadium on Wednesday.

Bruce Djite scored in the 89th minute to put United in the box seat of their Asian Champions League group, three points clear of their nearest rival with two games remaining.

While United’s striker will take the headlines for his finish at the death it was Galekovic who kept his side in the game with a world class save in the 11th minute denying Pohang forward Byung Jun.

Trani likened the save to the so-called ‘Save of the Century’ which denied Pelé at the 1970 Mexico World Cup.

“He reminded me of Gordon Banks when he was playing for England and he tapped it just as it bounced in the corner,” he said.

The match was a return to form for the United Captain who was at fault two weeks ago when Pohang earned a 1-0 win over the Reds in Korea.

“When the chips are down he’ll come up strong and tonight was just a brilliant performance,” Trani said.

Trani said he never gave up hope his side would score and championed a newfound resilience within the squad.

“It all comes back to the work that you put in during the week and all through what has been a tough time and that’s where I think the resilience comes from,” he said.

“We’re seeing the benefits of it.

Adelaide’s victory moves them to the top of Group E on nine points, leaving them in pole position to move into the knockout stage for the third time in the club’s history.

“This sets us up in a very good position to qualify [for the next stage],” Trani said.

United didn’t have it all their own way during the game however with the game fluctuating between dour patches of defensive play and enterprising end-to-end attacks.

The first half started brightly with end to end chances in the opening 15 minutes before the attacking play dried up as the battle for top spot in Group E became a defensive struggle with chances few and far between.

United’s best chance of the first half came in the seventh minute after a solid build-up including a number of short interchanged passes in the midfield unlocked Pohang’s defence.

The chance fell to Bruce Djite who powered the ball from outside the box but his left-footed shot was aimed straight at Hwa Yong who dealt with it easily.

At the other end Galekovic’s reflexes were all that kept the scores at parity in the first half after a brilliantly curving cross from out wide found the unmarked Byung Jun.

The Pohang striker’s header was set to give the Korean side a shock lead away from home before United’s captain dove to his right and palmed the ball around his post.

In an often dour first half neither side could carve out enough clear-cut chances to score as the teams went into the break with the scores at 0-0.

Pohang’s Romanian forward Zicu missed the best chance of the match in the 48th minute as his shot flew over the crossbar from close range.

Asamoah was played in down the wing and his near post shot was smothered by Galekovic, only for the rebound to fall to Zicu. Fortunately for the Reds the Romanian faltered in front of the unguarded net as his left-footed half-volley sailed over the bar.

Less than a minute later the Reds produced their best attack of the game as youngster Evan Kostopolous broke free down the left flank. Kostopolous was drafted into the side for injured playmaker Dario Vidosic and his low cross on 49 minutes deceived the defence and was met by Ramsay at the back post.

The Reds were to be denied by an outstanding save by Hwa Yong who blocked Ramsay’s half-volley which seemed destined for the back off the net.

It was a surprising, yet sensational season for Adelaide United, as they went agonisingly close to a fourth grand final appearance.   http://gty.im/1240848991 Season summary  Not many...

Is the pressure back on Melbourne City after failing to defeat yet another top-four side?

The defending A-League Men champions will host Adelaide United at home on Sunday with their semi-final tie poised at 0-0 aggregate, yet the pressure...