Stocky’s Scribbles: Taking it to the best 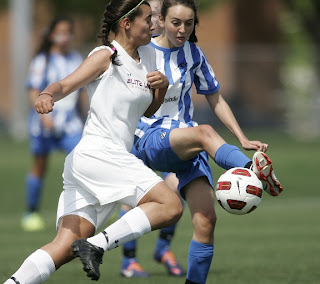 The depth and success of Texas Soccer programs was clearly on display as the Liverpool FC 1998 Elite Team challenged the Brighton Jets at the Ross Stewart complex in Farmers Branch Texas in game number two.

With the sun beaming down on a pitch that would rival AAMI park as a surface, the girls prepared to play another Top 10 American Team in the ENCL (Elite National Club League).

Ranked number four in the country, Liverpool FC pushed forward opening up our right wing defense and within 90 seconds of the game starting, they had scored. This was the case once again and the Jets found themselves 2 goals down very quickly inside first 5 minutes.

Going into the break, Liverpool FC 98 Elite were up 3 nil against the Jets as the girls struggled to maintain the opposition and the fierce pace of the game. What is very obvious, is the physical fitness and aerobic capacity of these U14/15 girls in the USA Elite Leagues and the continual running game the coaches deploy here.

Every minute of the game is consumed with running to space and creating the next play hence the Liverpool FC 98 Elite team were able to run in waves down the ground and always have three to four passing options. The midfield consistently roamed from defense to attack and all covered considerable ground – as soon as they felt tired they made the decision themselves to sub a fresh equally fast and competitive substitute.

The Jets pushed back and fought hard against the might of Liverpool FC 98 Elite. Many of our senior girls stepped up and led from the front against a very quick and physical team. The learning curve is steep yet each and every girl will take away aspects of their game that need developing and refinement if they wish to play at this level of the sport.

The second half was a much better one for the Jets. Coach Jaroslav Dedic decided to go on the attack and moved some of his key players up forward which resulted in the first goal of the tournament for the Jets from the boot of Amy Silver. This spurred the Jets on and they performed very well knowing they can match this level of competition with skill and talent – just needing extra physical fitness to run the whole game out.

Although the scoreline suggested otherwise, the Brighton Jets are now starting to gain valuable insight as to what they need to have in their arsenal to combat these ENCL Clubs. The structure here is very different at club level – these Elite Clubs are really more like our VCL Clubs and the girls are handpicked from across the regions (some players fly into Dallas to play and train).

Once the trials are conducted and a player accepted into the club then the sign-on fee is USD$1200 to $1500 per annum for elite training facilities and A grade international coaches. The girls train twice a week with fitness and physical training over and above this.

Some players have personal trainers who work with them on the “first ten yards” so they can develop explosive speed with the ball and elude opponents on the field – at U14/15 level. The game is broken down here into components and all bases are covered. Tactical workshops are developed to ensure a corner kick is maximized and every player knows exactly what their role is in executing.

It is now likely the Jets are out of the tournament with one more match left in their grouping against Texas Rush 97/98 Elite. The enthusiasm and team comradery is still very strong and all girls are embracing every minute of the tournament to maximize the experience and learn from the opposition.