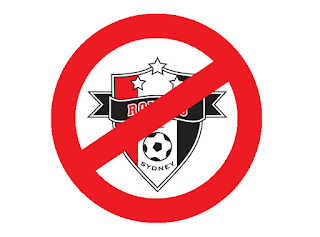 Football Federation Australia today announced that western Sydney, the apparent ‘heartland’ of football in Australia, will have its very own A-League team come the 2012-13 season.

FFA chief executive officer Ben Buckley said that the new club will have community engagement at the core of its focus. This will mean that the community get to decide the name, colours, culture, values and the logo of the club.

So forget ‘Sydney Rovers’. We took to Twitter last night when the news broke of the new A-League club and asked you what you thought it should be named. As we often do, we collected the ten best and put them in a list.

Find out below to see if yours made it in:

10. We start things off with a very clever suggestion from Simon Fisher. Simon thinks the club should be called Plan B FC. I am pretty sure you can figure that one out yourself.

9. The only Australian player in the newest edition of the video game FIFA Street, Daniel Cappellaro, thinks Western Sydney should have a Spanish flavour to it by calling them Real West Sydney.

8. Cam sent us in Western Sydney Frangipanis and we have included it just because it is so random. Maybe AirWick or Glade can be their shirt sponsor?

7. Karol Foyle believes the new club should be called the West Sydney Red Bulls. As crazy as it sounds, it is actually a pretty catchy name.

6. Our very own Christian Layland sent in his own suggestion and he thinks they should be called Sporting Club of Sydney, or Sporting Sydney for short. Not a bad name, if only the club played more than one sport!

5. Another one of our very own, Neil Sherwin, and Ben Clark both believe that the new club should be called the Western Sydney Mayflies due to the fact the club has the same expected lifespan as the insect. Have a bit of optimism lads!

4. Tom Greenard believes that the club should have a name that reflects the perception of the area, and what better to name them than the West Sydney Drive-Bys. Oh come on, it was not that harsh.

3. David Meacock thinks Western Sydney should pay homage to the many A-League clubs before it who have folded by calling themselves Western Sydney Gold Fury Knights United FC.

2. We’re not sure who came up with it, but Western Sydney Unicorns has gained a lot of momentum on the twittersphere. The first person to send it in to The Football Sack was Aaron Dibdin so we are giving the credit to you sir!

1. Media personality and The Football Sack fan and George Donikian thinks the club should be named Western Sydney United, and we could not agree more. It just works. And being a community club, the name United should be a key marketing tool in bringing the people of the west together to support an A-League club. The only downside George is that there is already a team in western Sydney that uses the name; NSW Premier League and former NSL club Sydney United 58.