Torrential rainfall swept across Brisbane football fields on the weekend, resulting in only three games going ahead through to the final whistle. Friday night’s double encounter saw Redlands and City collecting derby victories, while on Sunday Lions FC defeated Easts by the narrowest of margins. Wolves seemed to be cruising against North Star, until the match was abandoned at 2-0.
Redlands United 2:0 Capalaba
(Fyfe ’26; Barbarouses ’90)
The Devils emerged victorious over a brave Capalaba in a close-fought, end-to-end derby played in atrocious conditions.
The home side settled into the slip and slide nature of the game quicker, Graham Fyfe storming through three Bulldogs defenders and scoring past Mitch Thorn – only just. An arm-wrestle across the park ensued, with clear chances hard to come by. Scott Sargent missed a great chance to equalise midway through the second half, before Stephen Homer was dismissed for a crude challenge from behind. But the Dogs could not capitalise, George Barbarouses rounding the ‘keeper and the result in stoppage time.
The win sees Redlands climb to an impressive third spot on the ladder, while Capalaba’s inconsistent season sees them languishing mid-table.
Brisbane City 4:3 Olympic
(Shepherd ’51; Murray ’58, ’77; Austin ’61) (Byrne ’44, ’90; Panic ‘9)
The first Azzuri-Hellas derby of the year lived up to expectations – City coming back to edge Olympic in a seven goal thriller.
It didn’t look that way in the first half, as a well taken goal by Alex Panic and a sumptuous strike by Danny Byrne put Olympic in the driver’s seat. However a rejuvenated City ran all over their bitter rivals in the second 45, the comeback complete within 15 minutes of the restart. A barrage of attacking pressure left Olympic helpless at the back, goals from Andrew Shepherd, Antonio Murray and Jared Austin sending a vocal home crowd into delirium. Murray added to Olympic’s woes from the penalty spot with 15 minutes to play, before Byrne included another brilliant strike to his repertoire late on.
Mark Dykman’s men re-enter the fray near the top of the table, overtaking Olympic along the way.
Lions FC 1:0 Eastern Suburbs
(Kenyon ’53)
Lions FC continued their resurgence in the only game to go ahead on Sunday, recording their third straight win and clean sheet to move within touching distance of the top six.
In miserable conditions, the match somehow went ahead – a decision the home supporters would not regret. One goal was enough to get Lions over the line, in a scruffy encounter under the rain. Brodie Kenyon’s strike shortly after the restart ensured Lions’ winning streak would continue and the gap with Easts in 7th would be narrowed to just a point.
An enormous challenge against Wolves awaits for the newly promoted side, while Easts will be confident when they take on winless visitors Taringa Rovers. 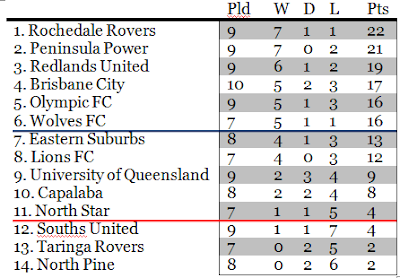