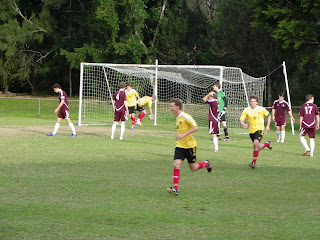 Sunshine Coast Fire have scored a stoppage time winner to break the hearts of a persistent Queensland Academy of Sport side at Meakin Park on Sunday.

Despite the QAS maintaining plenty of possession and equalising midway through the second half, the home side was left with nothing thanks to DJ Firth’s 91st minute stunner.

The Academy, facing the second of the league’s two greatest challenges in the space of two weeks, were looking to turn performance into results after a disheartening 4-1 loss to Brisbane, while Sunshine Coast were intent on bouncing back from a shock defeat at home to North Queensland.

Cool, overcast conditions foreshadowed a match of high intensity and the early exchanges were promising as Fire started on a positive note, forcing QAS ‘keeper Matthew Stein into a sharp early save.

The QAS were determined not to let another poor opening cost them, however, as only an outstanding last-ditch block inside the penalty area denied Kwame Yeboah a clean shot on goal, forcing the Academy’s attacking focal point from the pitch with a suspected thigh injury in the process.

Yeboah’s injury meant a reshuffle for coach Josh McCloughan as the introduction of Patrick Theodore accommodated winger Josh Riis’ move centrally, and the new man could have scored almost immediately when Brandon Borrello dinked a delightful chip to the back post, but Theodore’s unconvincing header was well blocked by defender Greg Henslee.

Despite the match being of a high tempo and quality, chances were rare either way with Sunshine Coast captain and regular midfielder Tyson Holmes, returned to the squad from suspension, isolated out of position as a lone striker.

The next true chance didn’t come until moments before half-time when, having drifted to the right of his central midfield station, the QAS’ Ben Liftin found Alistair Quinn in space through the middle, only for the right-back to slice his first-time, left-footed shot wide of a gaping far corner.

The close of the opening half was likely to have been more warmly welcomed by the visitors who, although relatively untroubled at the back, were unable to carve out the goalscoring opportunities they might have expected, while the hosts seemingly only required a greater threat in attack to compliment a sound opening stanza.

Yet, as has been the case on multiple occasions this season for the young Academy side, an important goal was all too easily gifted the way of their opposition. Less than sixty seconds after the restart the QAS defence made the gravest of mistakes, affording the clever Holmes time to nod a regulation long-throw down into the path of onrushing winger Alex Barlow, who made use of his untracked run to slam across Stein from a sharp angle. The early strike was a great fillip for an undermanned Fire outfit, capitalising on the Academy’s failure to regain concentration after the break.

Sunshine Coast then pressed for a second in the minutes following the opener as attacking midfielder Firth drew a quality one-handed save from Stein, before Holmes’ surging run down the right wing ended with a tired effort blazed over the crossbar.

The QAS had begun to wiggle their way back into the match after that period and managed to produce a splendid equaliser on 63 minutes courtesy of an improbable source. When Coast defender Ryan Smith was shown a yellow card outside the penalty area for a strong but seemingly ball-winning challenge, fullback Quinn was the man to take responsibility for the QAS. The Brisbane Roar youth’s confidence was fully justified as he guided his free-kick over the wall and out of Dale Hill’s reach in the Fire goal. Quinn’s superb effort was fully deserving of an equaliser which opened the floodgates for chances at both ends.

Holmes was beginning to exert more influence for the visitors having reverted back to midfield upon Kaine Frew’s introduction, but it was Liftin who came closest of either side, sidefooting onto the crossbar after neat interplay between Riis and Quinn.

As the match ticked into the final five minutes, Sunshine Coast likewise went agonisingly close to a winner when a clearing header was volleyed onto the base of the post, across goal and out by the impressive Greig Henslee, although that was to prove only a sweetener for Fire as they stole the win in stoppage time.

After Zane Sole’s free-kick from wide on the left was cleared out to its initial point of delivery, the New Zealand-born midfielder swung a deep cross back towards the far post where Stein could only manage to scramble a punch partially clear. A number of Sunshine Coast attackers had anticipated the delivery better than their counterparts and, with QAS defenders rushing out to unsuccessfully create an offside, attacking midfielder Firth reacted quickest to recover possession and a loop a hopeful shot over Stein, stranded midway, and into the vacant far corner.

The Sunshine Coast squad’s delight at the late show could not have found a greater contrast than with the heartbreak of a QAS outfit ruing more preventable errors. Fire’s celebrations were justified beyond the context of the match as it kept them within touching distance of league leaders Brisbane, while the QAS’ back-to-back losses, albeit to the QSL’s two premier clubs, means next weekend’s trip to top-four rivals North Queensland takes on extra significance.