“Stockies Scribbles” is back and this time Craig Stockdale is reporting from Coffs Harbour as The Football Sack’s adopted team takes on the rest of the country at the Westfield National Youth Championships running from July 9 to July 13 2012. 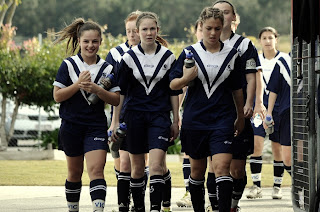 Day two at the National Youth Championships in Coffs Harbour and with rain descending on ground two, the Victorian girls marched out to take on the might of the Queensland Maroons in an early 9am game.

Recovery becomes a major issue with elite athletes and with the girls backing up from a late afternoon game yesterday against ACT, hydration, healthy food and a good nights rest are all important ingredients in preparation for the next days game.

There was rain overnight and the pitch was very heavy so the girls needed to be wary of passing the ball crisply and sharply to avoid any interceptions during the game. With pleasantries out of the way, both teams settled down to battle out the first half in trying conditions.

The Queensland midfield was sharp and came out of the blocks quickly feeding the ball out to the wings and creating space on either side of the pitch in offense. With a penetrating pass to the left corner, Queensland opened up the Victorian defense and with time and space were able to drift a long shot over the keeper and into the right hand corner of the net for a 1 nil lead.

Queensland now with a spring in their step, pushed forward peppering the goals and troubling the Victorians who seemed not to be settling at all. Again through traffic, the Queensland team were able to drive the ball forward and once again from the boot of a player hovering at the top of the box, Queensland scored another major to be 2 up at the half.

Being in a similar position yesterday, expectations were that the Victorian girls would come out firing and turn this one around as well. Unfortunately, this did not happen today and although the girls battled hard to the end, Queensland capitalised with some smart and piercing goals to open up the lead to 4 nil by the close of play.

The Victorian girls were beaten today by a superior outfit who were hard at the ball and very determined to take this game away after losing yesterday to NSW Metro.

With the Victorian girls ending day two with one win and one loss, they now need to regroup and focus on the simple things that will yield the best result in tomorrows game against Northern NSW.

The team certainly has an abundance of talent and with only a short time to gel before the tournament, now need to draw on their individual experience and inner determination to rebound and take on the Northerners tomorrow. Once again girls – Never Say Die!