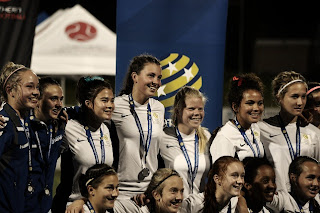 Beattie Goad (Richmond Soccer Club and  North East Diamonds) and Maddie Stockdale (Brighton Soccer Club and South East Cougars) have been selected from Victoria in the Australian U15 Girls 2012 All Stars Team.

This squad, chosen over the 5 days of the Westfield National Youth Championships in Coffs Harbour by the national selectors included 10 state and country teams who competed for the coveted trophy of National Champions for 2012.

Metro NSW once again hoisted the cup after winning their Group 1 division convincingly with Victoria U15 Girls ending in 4th place on the table. On the last day, the format provided an exhibition game where the NSW Metro team played the Australian U15 All Stars under lights at the BCU International Stadium in front of a packed house of spectators, families, players and officials. The culmination of the weeks activities saw the announcement of the 2012 Australian All Stars team which included the two Victorians in a squad of 20 players. This squad and others will attend training camps in Canberra and form the basis of a National U15 girls team to play in Asia later in the year under the national coach Vicki Linton.

The Beattie Goad story is a remarkable one, securing her third Australian All Stars nomination having represented Victoria in the U13, U14 and U15 girls state outdoor teams over the last 3 years. She won selection in the Australian U13 Girls National team in 2010 who travelled to Asia to compete in the Junior Championships. Beattie started out playing for several clubs in the Eastern region (Malvern, Richmond, Boroondara) competing against girls and then boys and with a powerful left foot, has matured into an attacking midfielder who displays precision ball control and explosive speed. Beattie is a natural at this sport and with her deft skills and committed attitude, certainly stamped herself at this tournament as one of the best U15 girls attacking midfielders going around in Australia.

Beattie represents her school in cross country running which assists her develop better endurance and speed for her football. No doubt, Beattie has a bright future in Women’s Soccer and we congratulate her on achieving another milestone in what is already a star-studded career at such a young age.

Maddie Stockdale’s journey to selection in the National All Stars team is equally interesting. Starting out as a National Talent ID candidate (AIS) for Australian Badminton at nine years old, Maddie won local U13 tournaments and was trained by the current National Australian Badminton coach. Football quickly overrun badminton as the preferred sport and soon she was playing with the Brighton Soccer Club under Mark Deady and Jaroslav Dedic (EFA Eagles Futsal).

2012 was Maddie’s first year to represent her state in the outdoor form of the game having previously represented Victoria in Futsal in the U12, U13 and U14 girls. In January 2012, she captained the U14 Victorian girls Futsal team who won the first women’s National Title for Victorian Futsal in 33 years of competition. Maddie then backed this up playing in the South East Cougars U15 VCL Championship team in March this year and from this gained selection in the NTC (National Training Centre) Program run by the FFA and FFV for talented players. Maddie at 5 feet 9 (aka Big Bird) plays centre back, defensive midfield and also centre forward being versatile and very agile for her size. Her strength on either side of her body combined with consistency and mental toughness secured her position in the All Stars team. Maddie currently concentrates on her academic pursuits to augment her sporting achievements. Maddie looks forward to one day representing her country in football on the world stage.

Congratulations to all of the Victorian U15 girls who represented their state at the Westfield National Youth Championships. The players were:- Jessica PITTS (Captain), Marianna ANTHONY (VC), Kehley BITZAS, Simone KENNY, Maddie STOCKDALE, Zoe STAMATOPOULOS, Jaylan MARTIN, Amy SILVER, Daniela GUDELJ, Beattie GOAD, Emma HECKENBERG, Lucy KENNEDY, Edita MACKAJ, Lani MURDOCH, Georgia ALBERTI and Diarna CARTWRIGHT. We hope you all gained valuable experience and insight that will assist you in your pursuits at the game of Women’s football.

Stockies Scribbles signs off from Coffs Harbour and the Westfield National Youth Championships in 2012. Women’s football needs more visibility and better coverage from the National Media organisations and I challenge Fairfax and the Australian media at large to provide equal coverage and exposure for the Women’s game of football – both nationally and at grass roots level. Thanks to The Football Sack for your continued support and coverage as we have followed the exploits of this adopted team.

You can read all Stocky’s Scribbles and follow the girls from Victoria and the Brighton Soccer Club here.