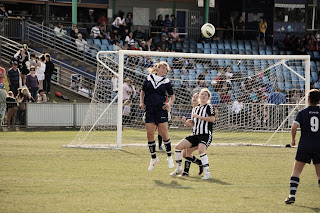 Day Three at the National Youth Championships saw the Victorian U15 Girls take on the Northern NSW team in conditions that were a stark contrast to the day before.

Basking in sunlight, the BCU Stadium arena was in pristine condition as the two teams marched in single file to the centre of the pitch to greet the referees and the opposing team players. The Victorian girls were in high spirits as their assistant coach who was ill the day before, made a remarkable comeback to be game side and inject some spark into the team.

A rousing chant echoed from the centre of the pitch as the Victorian girls prepared for battle.

The game started in fine fashion with both teams showing moments of flair and quick movement of the ball up and down the pitch. Victoria surged forward first and had several attempts on goal but no avail. With an air of confidence, the Victorian girls were constantly driving forward and unlucky not to have registered a major.

It was mid way through the first half when the Northern NSW team intercepted a pass and capitalised on an open Victorian defense to stream down the right wing and slot an amazing loop ball over the outstretched arms of the keeper and into the net for the first goal of the game – Northern NSW 1 to Victoria’s nil.

Not to be suppressed, the Victorian girls continued their assault on the ball and minutes before the last whistle skilfully passed the ball through the midfield to the teeth of goal where a scissor kick from Dani Gudelj made it into the back of the net over the keepers head.

The crowd celebrated the goal, only to see the flag raised by the lines lady for an offside call against Victoria – no score and as they say up here – no bananas…..

Northern NSW headed into the break leading one nil but the Victorian girls had played some of their best football and were giving all they had in an attempt to level the score.

The second half began with the same gusto as the first half – tight, physical and defensive football from both teams. The Victorian girls have played text book FFA football by deliberately attempting to bring the ball out of defence with careful possession play – which is part of the FFA curriculum and important in the development of the game.

With the lead now under their belt, the Northern NSW team were keen to bury the Victorians. Utilising the wings, Northern NSW advanced the ball quickly and through a laser like pass from the right wing, hit the feet of a forward at the top of the box and presto – another major that skittled past the outstretched reach of the keeper. Scoreboard – two goals to nil.

The Victorian girls did not drop their heads and instead lifted the tempo to try and retrieve some pride. Some beautiful one-touch passing from the midfield to the right wing and back inboard, saw the ball end up at the feet of the skilful Amy Silver. With deft foot speed she very quickly weaved her magic – cutting the defense of Northern NSW to shreds as she finally caressed the ball past the keeper and into the net for Victoria’s first score of the game. 2-1.

As the game progressed, so did the clock and the Victorian girls had another chance to equal the score through Amy Silver again only to see the shot evade the left post. Although the game was lost, the pride and endeavour of the Victorian girls was restored and they gave everything they could to take away the win.

Tomorrow the Victorian girls face their nemesis – the might and power of NSW Metro. We know they will all take up the challenge and “Never Say Die”.