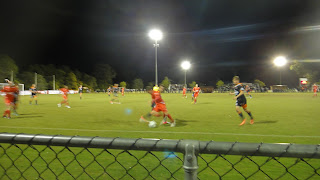 A young Brisbane Roar accounted for Redlands United 5-4 in a see-sawing, sea-side hit-out at Cleveland Showgrounds on Wednesday night.
The high-scoring, highly entertaining pre-season match saw both Roar’s Kwame Yeboah and Redlands’ Rhys Meredith claim hat-tricks, but it was Brendon Borrello who sealed the result for Roar with a goal in stoppage time.
The Roar side consisted of mainly National Youth League hopefuls – the notable exceptions being Ivan Franjic, who anchored the midfield throughout the ninety minutes, Fitzgerald on the right wing and back-up shot-stopper Matt Acton.
Played at a frenetic pace throughout, the tone of the match was established early when Brisbane opened the scoring courtesy of Fitzgerald’s fourth minute strike.
It began when the high-pressing Yeboah dispossessed a Redlands defender high up the park. He then played the ball for Fitzgerald, who shook a defender with a neat drag-back before curling his left-footed shot in at the far post.
Yeboah carved a chance of his own not long after when he was played in behind the line by a superb Franjic through-ball. However, advancing Redlands keeper Mitch O’Brien came out on top in the ensuing one-on-one with a splendid save.
The home side then began to find their way into the contest, Graham Fyfe and George Barbarouses looking particularly dangerous in attack while left back Michael Lee ventured forward to great effect for the Brisbane Premier League leaders.
However, it was Roar that extended their lead on 22 minutes when Fitzgerald returned Yeboah’s earlier favour, picking out the attacking midfielder with a sharp pass. The brash youngster then cleverly rounded O’Brien to leave himself with the simplest of finishes.
Redlands persisted though and eventually clawed a goal back through Meredith just before half-time. Lee, on one of several runs down the left flank, picked out the striker at the top of the box with a well-considered pass and Meredith’s subsequent shot scooted past the outstretched glove of Acton.
Returning from the break, both sides displayed increased vigour but it was Brisbane that would restore their two-goal buffer barely five minutes after the restart.
Yeboah once again capitalised on a Redlands turnover in their defensive third, beating one defender and dragging another with him as he dribbled across the top of the box before striking a low, left-footed shot past the somewhat unsighted O’Brien.
Sitting on a seemingly comfortable 3-1 lead, Roar then relaxed only to be caught-out by their opponents twice over the next five minutes – Meredith scoring both, with Fyfe well involved.
Redlands second came when Fyfe was picked out on the right by an astute switch of play. He then brought the ball to the byline before delivering a flat cross that was met by the barnstorming head of Meredith.
They were back on level terms two minutes later when Meredith secured his hat-trick. Again it started with Fyfe, this time the midfielder played Barbarouses in behind Roar’s line and, despite heavily jostling, the plucky number eight eventually struck a low ball across the face of goal that was directed home by the lunging Meredith.
With the momentum favouring his side, Redlands coach Matt Chandler then replaced his entire outfield contingent, the intention being to keep his stars fresh for an important weekend fixture. And while such wholesale changes might be expected to play in to the hands of the opposition, the resurgent Redlands continued to prove a handful for Roar who responded by noticeably increasing the ferocity of their challenges.
With fifteen minutes left to play, the home side took a deserved, albeit fleeting, lead when Darren Homer pounced on a deflection with a vicious volley from 15 yards out.
Not looking to be embarrassed, Roar pushed hard for an equaliser of their own. Their go-to man Yeboah popping up again in the 85th minute to secure his hat-trick, this time his run on goal assisted by a delightful flick from the heavily marked Borrello near the penalty spot.
The two former QAS teammates combined again shortly after when Yeboah almost snatched his fourth with a diving header from Borrello’s right-sided cross.
Finally, the pair’s persistence payed off in securing Roar a late winner. Yeboah’s defence splitting pass leading to a blocked shot that fell invitingly for Borrello, who then tapped home from six yards out.
The result concluded Roar’s run of fixtures against local league opposition, their next pre-season match against Newcastle Jets in Tamworth next week.

Meanwhile, Redlands United, who would be undoubtedly buoyed by their performance, face Eastern Suburbs at home this Saturday. A victory will secure the BPL minor premiership for the Cleveland-based club.

The curtains have officially been drawn on Brisbane Roar’s 2021/22 A-League Men season, so let’s look at how the side should be preparing for...

With the 2021/22 A-League Men’s regular season over, it is time we reviewed the performance of those clubs that failed to make the finals...

Brisbane Roar coach Warren Moon has lamented the current list of visa-players on his roster and their inability to provide the necessary spark throughout...