Women’s Football at its best! 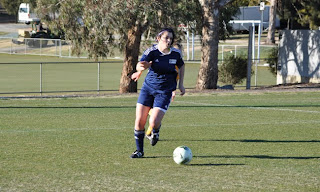 Stockies Scribbles is back reporting from the Capital of Australia following the Victorian National Training Centre (NTC) Girls Team as they challenge the very best female youth that Australia has to offer. The Victorian NTC girls are competing at the National Institute Challenge in Canberra this week. The Tournament kicked-off on Tuesday August 21 and finishes on Saturday, August 25 to showcase the very best female football players and to select the Australian National Team. FFA Coaches and scouts are diligently looking over the talent on display as Australia looks to further bolster its depth.

With the expectation that this would be the highlight game of the National Institute Challenge, both Victoria and New South Wales were pumped to step up and deliver the very best football for all to see. “Game on!!” was the reference from the sidelines as the many parents, supporters, siblings and selectors found their positions to view this highly anticipated battle of the two super powers of Women’s Football in Australia.

In the midst of the youth were the many senior Matildas players (four in total) along with another three from the Young Matildas U20 squad scattered across the field in opposing uniforms. The sun had set, the sky was black and the stars were shining – both overhead and on the field – as the temperature dived under double figures in the blink of an eyelid and the dew settled across Oval Number Two at the Australian Institute of Sport.

Victoria rightly went with experience to start the game and between the sticks was the co-leader of the team; Brianna Davey ably supported by Bella Scott, Alex Natoli, Jacqui Vogt and the other co-leader Stephanie Catley. Across the midfield was Jessica Au, Cindy Lay and Stephanie Magro while up front were the sprightly trio of Elaina Vatchy, Tiffany Eliadis and Tayla Mure.

The early pace was an absolute cracker and NSW were adamant they would exert their authority with silky passing skills and deft first touches across the ground. Only seven minutes had passed when NSW centred the ball from a wing and found the foot of their forward who guided the ball into the back of the net with a grace beyond her years. 1-0 and a wave of concern cut across the Victorian camp so early in the game.

The ensuing five minutes of play saw the NSW midfield and forwards relentlessly attack the goal only to have each attempt repelled by the desperate Victorian defensive line. This constant barrage put enormous pressure on the Vic’s defence who were able to withstand the pressure and mount a rebound challenge up forward.

In the 29th minute mark of the first half, Tiffany Elianis cut a path through midfield and rifled a pass to Cindy Lay only to see the shot sail over the cross bar at the behest of the Victorian supporters.

Shortly afterward, NSW forced a mistake from the defensive line and intercepted a pass resulting in a raking right foot missile that pierced the back of the net to register another major for the cockroaches. Two-nil is where we stood at the half time break and both sides retreated to the rooms for tactical discussions.

Coach Darren Tan stayed with the program and the pep talk at half time had the Victorians surging forward early in the second half; trying to reduce the lead to get back into the game. But the NSW outfit are a class act, the talent across the pitch was evident and they never really panicked; settling in midfield and controlling possession across the defensive line and so denying Victoria’s several attempts on goal.

By this stage the ground was a skating rink with the ball frictionlessly (new word) scooting across the pitch from end to end like a hockey puck.

Fifteen minutes into the second half Dani Gudelj and Kate Leder were brought into the formation to provide fresh legs on the right wing. Five minutes later Madeline Stockdale, Pheobe Parker and Alex Cheal made their presence felt on the pitch and all provided zest and drive through the spine as the clock ticked away and became the enemy of the Victorian girls.

As the rain began to fall across the pitch the curtain closed on a wonderful exhibition of Women’s football with the final result being a 2-0 win by NSW Institute over the Victorian NTC contingent. The skill and physical approach by both teams provided a spectacularly fast and furious encounter that left everyone wishing for more.

Australian women’s football has some wonderful talent in reserve and no doubt Matilda’s Head Coach Tom Sermanni and his band of merry selectors were on hand to enjoy the many talents and skills on display. The Victorian girls can hold their heads high and will front up again tomorrow at 2pm for another opportunity to display their prowess in the world’s game when they play a strong Combined team made up of the best Tasmanian, ACT and Northern Territory players.

For all the updates on The Football Sack’s own version of the Mighty Ducks, check out the range of Craig Stockdale’s articles right here.