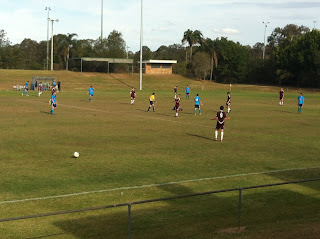 Bundaberg lived up to their moniker at Meakin Park on Sunday, striking two second-half goals to snatch a point from the Queensland Academy of Sport.

Striker Shane Youngberry capped a dominant second-half for the visitors by firing home an 88th minute equaliser to prevent the Academy from climbing into fifth position.

A terribly lacklustre first-half for Spirit seemed to have them out of contention after forty-five minutes, before a rousing rival ultimately retrieved the two-goal deficit and denied the QAS consecutive victories.

Seventh-placed Bundaberg were off the pace from kick-off as Academy midfielder Alistair Quinn helped his side to dictate possession and press forward, and it was he who converted the opener from the penalty spot in the 8th minute.

Nippy winger Patrick Theodore was clumsily barged over late by central-defender Corey Haack having already squared a cross back centrally, leaving Quinn to clinically slide the QAS into an early lead from twelve yards.

The Brisbane Roar youth was setting the example for his teammates in many facets as the hosts took complete control, although they were unable to carve out another clear chance until the half hour mark, when their stranglehold over the contest translated into a second goal.

As a rare Bundaberg attacking move broke down, the ball was shifted down the left flank for classy winger Brandon Borrello, the ever-present star of the Academy’s season, to stride into the penalty area, outfox Haack with an immaculate stepover towards the byline, and provide a cutback for centre-forward Sam Wilkinson to poke his second goal in two matches into an empty net.

The goal was entirely down to Borrello’s masterclass – the man who has already made an impression in Brisbane Roar’s pre-season exuding confidence on the ball.

A pair of half-chances for Bundaberg might have seen them claw a goal back before the break, but the opportunities nonetheless foreshadowed a much-improved second term for a side without victory in three matches.

Spirit found their avenue back into the match just three minutes after the restart when Academy fullback Joe Franze was caught out of position following a forward venture. The left-sided defender was clinically punished as the dangerous Youngberry used the space to measure a cross for strike-partner Brendan Davis, who finished with aplomb across ‘keeper Andres Pascoe.

The QAS were rattled by their poor start to the second-half but could still have restored the two-goal advantage with Wilkinson unable to first snaffle a defensive error, before spurning over another Borrello cutback.

Bundaberg had nevertheless assumed the ascendency and corrected their impatience in front of goal when a hot Davis drive forced Pascoe into a spectacular one-handed save.

Unable to break out of their own half and having lost both the influential Quinn and central-defender Tremayne Sadler to injury, the QAS eventually wilted the under the pressure as Spirit finally accepted the offer to work in behind the hosts’ defence.

Captain Brett Kitching exemplified his willing performance by feeding a great through-ball for Youngberry to nudge past the onrushing Pascoe, retrieve on the byline, overlook the cutback options and blast lethally into the roof of the net for an 88th minute equaliser – the last key action of the clash.

A point apiece was perhaps the fair result as both sides managed to each construct a forty-five minutes that, if extended to the full ninety, would be of a quality high enough to see them challenging for finals, but as such they will both scrap for a place between fifth and seventh in the final round.