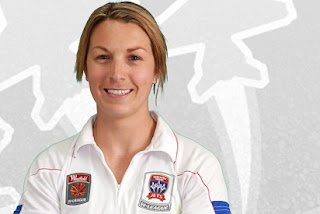 What a way to start the new Westfield W-League season!

We always knew that Sydney FC away was going to be a tough, interesting game for us but I don’t think anyone would have expected the six goal thriller that it was.

The mood in the dressing room before the game was calm and as soon as the first whistle blew we clicked into gear. Both sides had early chances on goal on what would have to be one of the biggest fields we have ever played on (thank God I’m not a winger).

As the game played out we opened the scoring and at one stage were 3-1 up and I thought that was a lead we would comfortably hold onto. Sydney had other ideas and as momentum played into their favour we were rocked by a ten minute spell of constant threats on goal which resulted in Sydney clawing back to tie the game 3-3.

As the final whistle sounded the draw felt more like a loss. The team were left to ponder the one that got away.

Many positives can be drawn out of the game; the goals scored, the combinations formed and the point awarded on the road to what is a great team in Sydney FC.

We now have to move on from that result and the disappointment as we to turn our attention to our next big challenge; League Champions Canberra United in what will be our first home game of the season.

We will train hard this week starting today with a double session of weights in the morning and a field session tonight and hopefully come away on Saturday with our first win and the full three points.

See you at the game….. Hayley

Club Captain for Westfield W-League side Newcastle Jets, Hayley has represented Australia at many levels including the Matildas. Catch the W-League every week at your local groundor if you can’t make the game watch it on ABC1. Read Hayley’s other columns for The Football Sack!

This season, the Newcastle Jets launched a Facebook pagejust for their W-League team, be sure to like it.