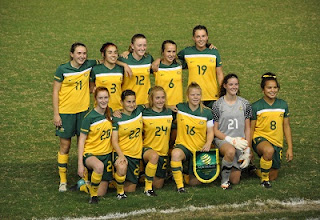 On a day that most Australians hold close and dear to their hearts, we remember those who have gone before us and sacrificed so much for our freedom and love of country. Lest We Forget.

So when the Australian National Anthem beamed across the loud speakers of the Rizal Sports Stadium in Manila, I reflected on our lost family members from both the World Wars and I could not hold back a tear as my daughter fulfilled a dream of representing her country on a very special day indeed. The faces of all the Australian U17 Womens team were somber and reflective on this day of remembrance – yet a strong sense of purpose was evident and this did not bode well for the Philippines.

Earlier in the afternoon, Thailand had secured its place of qualification against Myanmar winning 3-2 in a hotly contested qualifying match and will head to the next round of the AFC U17 Womens Championship in November 2013 to face off against the goliaths of women’s football in Asia.

With temperatures again hovering in the 30 degree Celsius range and humidity of 85%, the Australian starting lineup looked fresh and ready for action under lights for the first time against a wary Philippine outfit. The Philippine team was ably supported by a raucous crowd of drummers and cheering compatriots that created an even more exciting atmosphere across the Rizal Stadium.

Being the perfectionist she is, coach Vicki Linton was adamant Australia would maintain their dominance in these qualifiers – no questions asked. Linton was looking for a clean sweep opting for several changes to the starting lineup for game three that would hopefully confirm the dominance of the Australians in Group C once and for all. 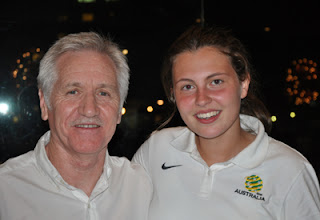 Georgina Worth was given the task of holding down the fort in goal ably supported by an attacking defensive line of Victoria Guzman, Madeline Stockdale, Chloe O’Brien and Talitha Doro. The central midfielders of Ayesha Kirby, Alycia MacQueen and Jessica Waterhouse (C) were to dominate possession and create havoc with the opposition by opening up opportunities for the exuberant and dynamic forwards of Beattie Goad, Caitlin Cantrill and Tulia Palozzi.

After a nervous start not dissimilar to that of game one, the Australians began to find their feet in what was now four inches of turf. The defensive line was beginning to settle and switch the ball around with some impressive long through-balls from Guzman and Stockdale opening up opportunities forward but Australia were not able to finish the job early.  It was not until the six minute mark when the silky skills of Ayesha Kirby were on display as she cut through the Philippine defensive line with a wonderful solo effort, struck a bullet like left foot shot from within the penalty box past the falling outstretched arms of the Philippine keeper Cogswell to register the first major of the evening for Australia – 1 nil.

The ball yo-yoed from one end to the other with the Philippine team advancing on goal for the equaliser but only to be thwarted by the safe hands of Georgina Worth up back.

The wingers of Beattie Goad, Talitha Doro and Chloe O’Brien were driving the ball deep into the forward line with some great crosses being steered to the top of the box time after time. Not to be denied her chance in the spotlight, it was three minutes later at the 9th minute mark when the Australian midfielder Alycia MacQueen threaded a ball through the Philippine defensive line to score Australia’s second goal. 2-0 and momentum was building.

A free kick from a hand ball was awarded to Australia minutes later and Jessica Waterhouse stepped up to the plate to try and bury the hatchet early, only to see the Philippine keeper Cogswell cleverly deflect the ball over the back of the net in an excellent display of keeping.

Unhappy with the result, at the 16th minute mark Waterhouse quickly secured the rebound from the Philippine midfielders and like a woman on a mission; pounded a 30 metre plus right footer that sailed into the net registering her first goal of the game and her second of the tournament. Australia 3-0 and the gap was widening in the score line.

With the ball just outside their box, a free kick was awarded to the Philippines and up stepped Captain Shannon Arthur to take the shot. She subsequently managed to guide the kick over the Australian wall (some big timber in that) and sneak the ball under the cross bar for a Philippine goal. The local crowd erupted by dancing and singing emphatically as the Philippines clawed back a major and the scoreboard showed three goals to one. 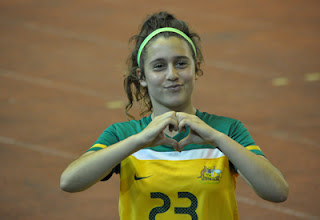 Australia regrouped and immediately took the ball forward with sound possession play that saw Catlin Cantrill descend on the ball and punish the opposition for not marking her with a quick response to put the Australians back in control at 4-1.

The Australians were attacking at every opportunity now and peppering the goals but Philippine keeper Cogswell has been outstanding preventing many Aussie attempts on goal.

In the good spirit of the game, The Philippine team continued to attack in the hope of a clawing back the score line further only to see Chloe O’Brien stream down the wing and setup an opening for Tulia Palozzi to run onto the ball and score an emphatic goal for Australia – the gap widened to five goals to one.

Shortly afterwards, the whistle sounds for half time and the Australians have completed their most successful half of football on tournament leading 5 – 1.

Upon starting the second half of the game, Linton immediately made her first substitution of the game replacing Captain Jessica Waterhouse with Julia De Angelis to begin proceedings.

Australia push forward only to be repelled by the amazing single handed feats of the Philippine Goal keeper Cogswell who manages to stop two short ranged attempts by the Aussies early in the half and prevent Australia scoring in the first 13 minutes.

With solid defense at both ends of the ground driving the play, it was not until the clock clicked over 61 minutes that Stockdale moved the ball quickly from defense with a run through the middle to Caitlin Cantrill who nonchalantly strolled around the opposition into the box and slotted a shot past the gallant Cogswell for goal number two pushing Australia to a 6-1 lead.

The Philippine offensive line lead by Diaz continued to threaten Australia’s defense but the ‘Fab Four’ comprising Guzman, Stockdale, O’Brien and Doro remained solid and circumvent any advances on goal. A rebound from the defensive line for Australia sees the ball again make its way forward where Catlin Cantrill receives a delicate inside pass from Tulia Palozzi and Cantrill brings up her hat-trick of the match in the 73rd minute pushing Australia to an unassailable 7-1 lead. An amazing effort by Cantrill to personally score her first hat-trick and deliver the hat-trick of wins for Australia in Group C.

With her work done for the day, Cantrill is clapped off the pitch and is replaced by Kally (Wally) Lewis up forward to add some extra oomph to the offensive line. Within minutes she makes her presence felt with a solid shot on goal but directly into the arms of the Philippine keeper. Shortly afterwards, Linton substitutes keeper Georgina Worth with Nicole Simonsen.

With the clock now ticking down, the final roll of the dice is played by Tulia Palozzi for the Australians; with poise and skill Palozzi evades two defenders and opens up the goal line for a one-on-one with the keeper before chipping into the back of the net to register her second for the game and goal number eight for the Australians. What a goal to finish the campaign!

Eight goals to one for Australia as the whistle blows and the Australians congratulate their opponents on a well played and hard fought game.

Congratulations to all members of the Australian U16 Womens football team who have emphatically qualified for the U17 AFC Championships in 2013 in China. Australia recognizes the task ahead is going to be tough coming up against some of the best in women’s football from around the world; Japan, South Korea, North Korea and China.

On behalf of all the girls and parents, I wish to extend our gratitude to the entire Australian Support Team; coaches Vicki Linton, Nicola Williams and Robert Matosevic in goals.

To Team Manager Kean Marshall who went beyond the call of duty in looking after the girls and informing the parents of events as well as Doctor Trish Dobson, Physio Sunita Sidhu and Gear Manager Oliver Mickoski for looking after the girls physically and mentally during an emotional period. To our special guest FFA officials Tom Sermanni and John Boultbee for their mentoring and anyone else I have missed, the parents all thank you for your efforts and support.

And finally to those parents that made the trip to the Philippines, I know the girls and the support team were grateful for your support during the event. It was a great result and one we will all look back on and remember fondly as our girls represented themselves and their country so well.

Stocky Scribbles will now be substituted off the pitch for the remainder of 2012. All the best to the girls, officials, families and supporters of women’s football in Australia – and as heard from the sidelines this week, “Never Say Die.”