Jets hold on for away victory

The Newcastle Jets have tonight defeated the Western Sydney Wanderers 2-1 at Parramatta Stadium to move into second place on the A-League Ladder. 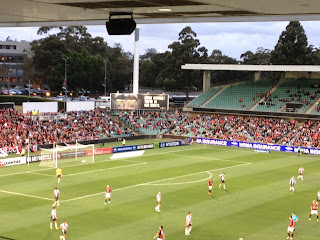 In a game that was dominated by the home side, the Wanderers produced some of the A-Leagues best football this season. But a concrete defensive effort by the Jets denied the home side a third consecutive victory.

The Wanderers drew first blood in the 14th minute through a devious one two touch from Shinji Ono, assisting Joseph Gibbs with his first goal for the club.

Scores were level on 27 minutes thanks to the head of Ryan Griffiths. Just minute’s later, international sensation Emile Heskey put the visitors in front in the 37th minute with a near post finish, increasing his personal tally to five goals for the season.

Joseph Gibbs almost had his second for the night on 57 minutes, but failed to hit the target, struck just wide of the far post.

On 61 minutes, Mark Bridge’s delivery in to the box provided Gibbs yet another chance to equalise, but he failed to beat goalkeeper Mark Birighitti.

The best chance of the second half came in the 71st minute, with Shinji Ono gifted a one on one opportunity with the goalkeeper. Birighitti proving hard to crack, saving Ono’s shot.

Jacob Pepper saw red in the 89th minute, but to the Jets credit, their defence held strong for a gutsy away victory. The Wanderers have the task of flying west to take on the Glory at Nib Stadium next Sunday, while the Jets play host to the Phoenix.