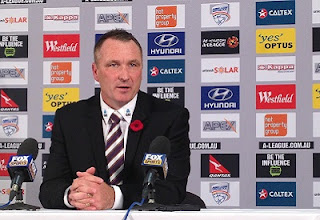 Billy Mehmet and Dario Vidosic will steal the plaudits for their goals in the stalemate, but it was Dodd’s exit that held significance in the Remembrance Day clash.
The 32-year-old spent six seasons at United and captained the Reds in his final three years at the club before joining the Glory in 2011.
Dodd was replaced in the 85th minute of the clash and was cheered off by both sets of fans, the winger reciprocating by clapping to the Hindmarsh as he bowed out of the match.
Glory coach Ian Ferguson praised the Adelaide crowd and said the gesture displays how fondly the fans and player recall their time together.
“There’s a mutual respect from player to fans and I think they showed that,” Ferguson said.
“You know you get taken off and you get that ovation I think it was a great thing from the Adelaide punters.
“To be fair he was captain here and he had four or five fantastic years here. He’s a winner and I think the fans realise that and to come back and get taken off so late on and get that ovation, it says a lot for Travis Dodd and Adelaide, it was fantastic,” he said.
United coach John Kosmina said either team could’ve snatched victory and said it was critical his side continued to perform at home.
“Every time you drop two points it is costly, but it’s only six games into the season, there are still 21 to go,” Kosmina said.
“If there is a bottleneck (at the top) and we’re still in it with six games to go, I would be pretty happy,” he said.
Ferguson shared his counterpart’s thoughts and felt a draw was a fair result given the amount of chances that the teams shared.
“Both teams had some great opportunities and overall it was a fair game and an even game, 1-1 was a fair result,” Ferguson said.
—
Goal(s): Mehmet 43’ (1-0), Vidosic 49’ (1-1)
Adelaide Starting XI: Galekovic (gk) (c), Malik, Boogaard, Fyfe, Cassio, Carrusca, Vidosic, Bowles, Neumann, Ferreira, Kostopolous.
Subs: Djite, Watson, Ramsay, Hall (gk).
Perth Starting XI: Vukovic (gk), Van den Brink, Mehmet, Ward, Heffernan, Miller, Dodd (c), McGarry, Risdon, Jamieson, Thwaite.
Subs: Pantelidis, Smeltz, Harold, Italiano (gk).
Crowd: 9212
Referee: Peter O’Leary