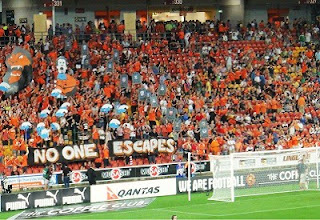 Berisha’s goal, his 25th for the banana-benders in thirteen months, exemplified the capabilities the Albanian brings to the Brisbane forward line and stand in stark contrast to the two goals scored by Alessandro Del Piero in the same match.
Admittedly, Del Piero’s goals were superb; generated out of little more than a spark of an idea and put into effect by the Italian’s unparalleled control of the ball.
In short, Del Piero saw an opportunity and took it – twice – confident his highly skilled hoofs would follow the path laid out in his mind. The same, however, cannot be said for Berisha’s goal.
While his goal-scoring record is undeniable, it also serves to conceal some of the flaws in Berisha’s game – flaws that illogically make him a better a player; not just individually but as part of the team.
When Del Piero split apart the Roar defence for his second goal nobody laid a finger on him. He didn’t spin on the ball like a whirling dervish to break the Brisbane line, he merely timed a run and worked an elegant one-two.
It was beautiful because Del Piero made it look simple and his touch made it so.
Berisha’s touch has never been as elegant. So when he looked to single-handedly restore the Roar’s two goal buffer on the counter attack, it was never going to play out as sublimely as Del Piero.
Where the Italian waltzed through the Brisbane defence untouched, Berisha brushed off the challenges of three Sydney players, losing and regaining the ball at least once, darting one direction and then back in another, relying on little more than sheer force of will to press on and eventually score.
A review of some of Berisha’s previous 24 goals show a similar theme – a torrid and tenacious never-say-die attitude that sees him clatter past defenders inelegantly before finishing well enough to forgive the sometimes scrappy lead up.
While Del Piero’s goals will be rightfully lauded as works of genius in the post-match discussions, it was Albert Einstein, that most famous of geniuses, who said, “Genius is one per cent inspiration, ninety-nine per cent perspiration.”
It begs the question, which of the two was the true genius on the night? Del Piero delivered two hits of one per cent, while Berisha served one shot of ninety-nine.
They were three different strikes of genius, but Berisha’s ultimately proved the more decisive. Even if it weren’t as pretty.