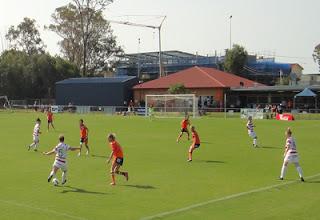 A brace of goals from Matilda Catherine Cannuli – including a 35 yard wonder strike from the left touchline – has delivered Western Sydney Wanderers a 2-1 victory over Brisbane Roar at Cleveland Showgrounds.
Wanderers performed assuredly and dominated possession throughout the afternoon, but it was Cannuli’s magical 55th minute goal that ultimately secured all three points for the visitors.
With the score locked 1-all, the left-sided attacker pounced as pint-sized Roar goalkeeper Hashima Kishi strayed off her line; Cannuli’s long-range lob clearing the Kishi before holding up in the bay breeze and sneaking under the cross bar.
The visitors were good value for their win against a Roar side missing six regulars through international duty – completely dominating the first half before seeing off a unconvincing second half Roar resurgence.
The experience of Cannuli and Sarah Walsh in the Wanderers front third proved a handful for the Roar defenders from the outset – Walsh heading wide at the near post from a corner with the first chance of the game on five minutes.
Three minutes later, Cannuli opened up her afternoon’s account when she poked home Louise Fors’ well-placed cross to the far post with an outstretched right foot from close-range.
In the twentieth minute Cannuli came close to extending the lead after Kishi fumbled Linda O’Neill’s cross at the far post, the ball rolling over the byline before the surging Cannuli could get a touch.
Wanderers continued to threaten the Brisbane goal as the half drew to a close – Trudy Camilleri and Samantha Spackman coming closest – while Brisbane’s Hannah Beard struggled for supply at the top of her team’s formation.
Canulli spurned chance to extend the lead just before the break after pouncing on a deflection from Camellieri’s shot, however her shot from fifteen yards spun off the side of her boot, missing the target.
After not having a shot on goal in the first half, Brisbane looked like a new team in the second. And it was only three minutes after the restart that Amy Chapman restored parity for the home side – steering in a cross with her right foot amid a congested penalty area.
The resurgence continued when Amy Chapman went on a mazy run from her own half, evading three challenges, before firing a vicious shot that was directed straight at Wanderers goalkeeper Elizabeth Durack.
Two minutes later, Cannuli ended the comeback with her match-winning goal and the game returned to a familiar pattern.
Cannuli, Spackman and Walsh spurned further chances to seal the result in the remaining half-hour as the humidity began to take its toll on the players stamina.
A final flourish of excitement came in the dying moment’s when Brisbane’s Elise Kellond-Knight tried to rescue and unlikely point for the hosts – however her well-driven, thirty-plus yard freekick swerved wide of the left post to the disappointment of the parochial home crowd.
You can watch the A-League live for only $25 a month. Click here to read our review of Kayo Sports and to start your 14-day free trial.
Share
Facebook
Twitter
Pinterest
WhatsApp