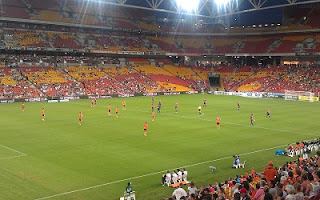 A bizarre double send-off following a scuffle on the cusp of half-time failed to alter the course of a dour evening at Suncorp Stadium as Brisbane Roar secured a 1-0 win against Newcastle Jets on Saturday night.

Both teams were reduced to ten players just prior to half-time after Josh Mitchell took exception to an innocuous challenge from Thomas Broich.

As the dust settled from the subsequent scuffle both players found themselves dismissed by referee Brenton Hayward – Broich receiving a straight red card, Mitchell a second yellow card.

Replays of the incident proved inconclusive but suggested Broich’s dismissal may offer grounds for an appeal by his club during the week.

The incident arose soon after Brisbane had taken the lead from the penalty spot via Besart Berisha, the star striker converting after Mitchell brought down Hingert, earning the defender the first of his two cautions for the night.

The Jets started the game brightly, Heskey twice failing to connect – once with the head, once with an outstretched foot – with teasing balls into the box from Ryan Griffiths in the first five minutes.

On 14 minutes James Brown was played through on the back a Bernardo Ribeiro-Emile Heskey combination, but the young attacker’s shot was spectacularly denied by Michael Theo’s full -stretched left-handed save.

As the half hour neared, Roar seemed to regain their mojo – a long period of possession for the hosts, reminiscent of season’s past, resulted in Erik Paartalu curling his left-footed shot wide from the edge of the area.

Newcastle sat further back and Roar edged ever closer to an opener – Murdocca brought down on the edge of the area, resulting in a stinging Broich freekick being denied by the stoic Jets wall.

Roar continued to dominate field position before, on the tick of forty minutes, the dam finally burst with Mitchell’s ill-timed challenge on Hingert and Berisha’s subsequent penalty.

The second half played out similarly to the first – the extra space afforded by ten-v-ten failing to open the game up to any significant degree.

Following the restart, Griffiths attempted to inspire his side, turning at the top of the box on 47 minutes before rocketing a shot that again required Theo to produce a fully-stretched save, this time to the goalkeeper’s right hand side.

The rhythm returned to Roar shortly after, once again taking command of the ball while creating few genuine scoring chances  – the missing man creating an imbalance in Brisbane’s all-encompassing build-up play.

The right back rode the attentions of a defender before picking out the unmarked Henrique at the far post, however the Brazilian’s shot – if that is indeed what it was – proved gentle enough to afford Matthew Nash the time for a scrambling save.

While Newcastle flirted with the idea of an equaliser they failed to get in behind Brisbane’s makeshift central defensive pairing of Matt Jurman and James Donachie; the visitor’s night summed up when Griffith’s soft header at the far post failed to find the target on 89 minutes.

The result is the Roar’s third of the campaign and will alleviate the pressure that had been building on Roar manager Rado Vidosic.