5 reasons to stop watching the A-League in 2016 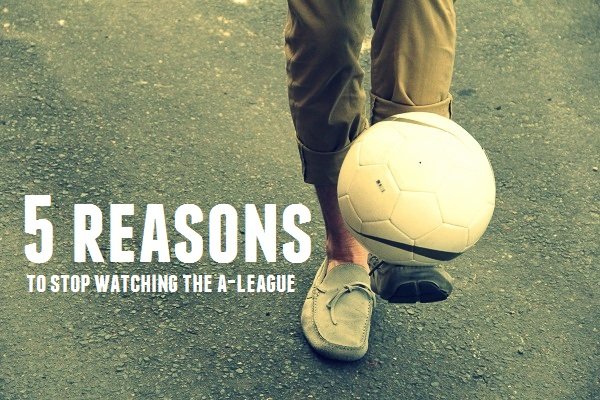 It’s back! Thursday marks the return of the Hyundai A-League for another year, and with it a wave of flares, unprovoked chanting and disruptive walking.

That’s right, season eleven of the country’s national football competition kicks off this week, and you should definitely not watch it unfold. Here’s why.

Much hype has been given to the lack of hype this season brings. With no Del Piero or David Villa like hysteria, you’ll only be watching this season if you’re actually into the football. You’ll likely be sitting in an empty stadium next to idiots such as Ange Postecoglou and Paul Okon. And you’ll be distracted by their constant scribbling. Do they even watch, bro?

There’s just something unsettling about Socceroo star Dario Vidosic playing for the Wanderers. He shone at Adelaide for three years and won a lucrative contract overseas with Swiss outfit FC Sion, but is now back playing in red & black, this time in hoops for Western Sydney. It’s just weird, and we ain’t got time for weird.

There won’t be rugby-like margins

The age old argument that watching football is boring because there might only be a one goal separating the two sides. Narrow victories aren’t interesting, right? It’s just like the NRL Grand Final on Sunday will go down as one of the most boring games in the history of the competition because there was only a point in it. That makes football a whole season of NRL Grand Finals.. ugh.

It’s been so long since the last season of the A-League that we’ve pretty much forgotten who the players are. It’s like watching the first episode of a Game of Thrones season having waited a whole year; who the fuck is that guy and when did they change sides?  We’ve blocked out living in an Australia before Abbott was back-stabbed but can we block out the six months between drinks in the A-League?

Who starts a competition on Thursday, anyway?

Thursday is a time to ponder weekend plans, research fantasy changes and prepare yourself mentally to go to work on Friday. It’s a kind of a nothing day. To have the launch of an exciting season of football is surely going to mess with a lot of people’s schedules of navel gazing and we can’t have that. We Aussies need some laid back time. That can’t be done in a stadium with mates drinking beer.