The A-League transfer window has barely opened and already Perth Glory have made a significant move, with Dutchman Guyon Fernandez dumped in favour of returning striker Andy Keogh.

Once the Irishman’s re-signing at the club was confirmed last month it was only a matter of time before a spot was found for him in the squad at the expense of one of Glory’s visa players. 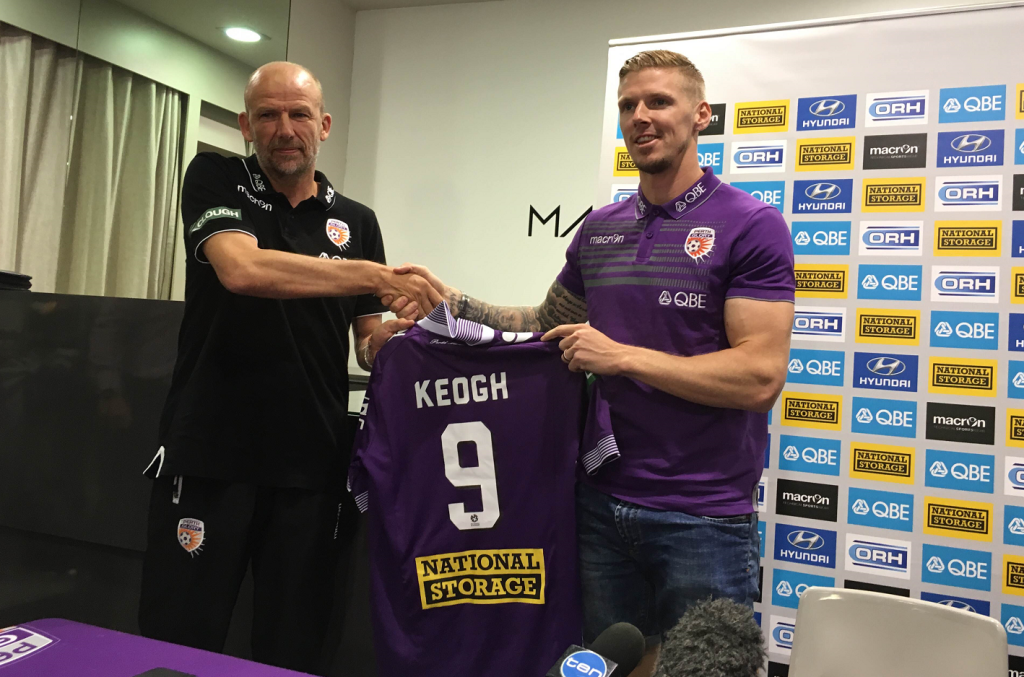 Pending international clearance, he will play some part in Saturday’s home game against Adelaide United.

From a football perspective, it’s a smart move. Fernandez managed just five games in the west, scoring one goal, and last featured on November 15 against Brisbane Roar.

He completed 90 minutes just once in the A-League after arriving late to preseason.

Keogh, on the other hand, is raring to go and will be looking to hit the ground running after finishing last season as Glory’s top scorer with 12 goals in his debut campaign.

A brief spell in Thailand didn’t work out for the 29-year-old so he opted to return to Perth where he penned a two-and-a-half year deal to stay with Glory until at least 2018.

“Going to Thailand was a good opportunity for me to get some security for my family and myself after the season that we had,” said Keogh of the switch to Ratchaburi FC.

“I didn’t enjoy it as much as I thought I would and it didn’t meet what I expected of football so I took the decision to step away from a good contract to come back to Perth where my family are.”

Given his age, pedigree, and A-League record to date, Keogh is exactly the sort of player that Glory need to build a team around.

The prospect of him running defenders ragged while receiving service from the excellent Diego Castro is reason for optimism heading into the second half of the season.

However, with the acquisition comes salary cap related baggage, and Keogh’s implication in the fiasco that saw Glory booted out of last season’s finals cannot be overlooked.

Football Federation Australia (FFA) alleged that payments were made to Keogh’s wife from the Perth Fashion Festival, an event of which Glory owner Tony Sage is a director.

The alleged deceit led to the finals expulsion and left a sour taste in the mouths of many supporters, one that hadn’t gone away by the time Keogh held up a Glory shirt again in early December.

The fact that the player has made no comment, offered an apology, or even tried to plead innocence to any knowing involvement hasn’t adhered him to many still hurting from last season.

Club CEO Peter Filopoulos, who arrived at Glory post-salary cap saga, spoke passionately about the future at Keogh’s unveiling, and is understandably striving to draw a line under the matter while also attempting to rebuild the trust of supporters.

For Coach Kenny Lowe though, he now has a quality striker at his disposal with a finals spot still very much a possibility after a run of good form.

Keogh’s re-signing is likely to remain a divisive topic, however, irrespective of how many goals he manages to score between now and 2018.

The fallout from Rebecca Wilson’s Daily Telegraph weekend article, which names 198 fans banned from A-League grounds, threatens to damage more than just the...
Read more
Love your football?
Subscribe to our weekly football wrap. During the season we'll send you all the week's football action straight to your inbox.