Group D Preview – What can Argentina do? 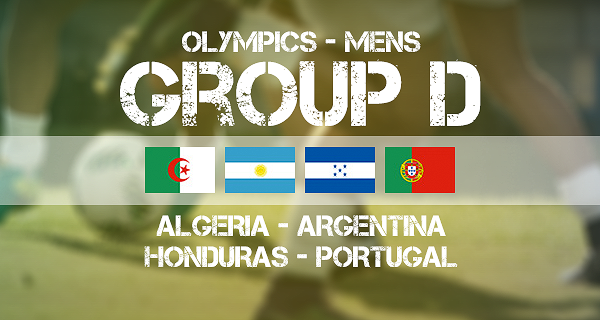 Road to Rio: The Argentines were the first nation to qualify, courtesy of their victory in the South American U/20 Championships early last year. They were comfortable in the group stage, accounting for Peru, Bolivia and Ecuador, although a loss to Paraguay provided some disappointment. However, they hit their straps in the second stage, beating Peru and Brazil, before drawing with Columbia and seeing off the hosts Uruguay to book their place in Rio.

Coach: Former defender for Los Blancos, Julio Olarticoechea made over 30 appearances for the national team. Having been part of their 1986 World Cup-winning squad, knows how to win international tournaments. Given Marcelo Bielsa and Sergio Batista, his predecessors at Argentina’s last two Olympics, struck gold, the pressure will be on him to deliver a similar outcome.

Key Players: Real Sociedad goalkeeper Geronimo Rulli could be key to Argentina claiming a third gold medal in this event. One of the side’s mature-age players (despite being just 24 years old), the custodian has made 52 appearances in La Liga over the past couple of years. His finest hour arguably came against Barcelona, where he repelled wave after wave of attacks to help his side to a 1-0 draw.

While this side may be devoid of the big names who spurred them onto victory in Beijing, West Ham’s Manuel Lanzini looms as their match-winner. The 23 year-old enjoyed a great debut season in the English Premier League, scoring 7 goals in 30 appearances as the Hammers surprised many to finish 7th. Armed with pace, vision and that special something, Lanzini figures to be the focal point of Argentina’s attacks.

Verdict: This Argentina outfit may not possess the star-power their previous sides had, but it’s still a team full of undoubted talent. They’ll be favourites to take out Group D and if they can beat Portugal, it should set them up nicely for the rest of the tournament. If they make it to the knockout stage, expect them to do some real damage. The semi-finals should be their target, so don’t rule out a medal.

Road to Rio: Portugal qualified thanks to an impressive showing at the U/21 European Championships in 2015, where they beat the odds to make the final. Despite a tough group, the Portuguese qualified for the next phase after beating England and drawing with Italy and Sweden, enough to book them a ticket to Rio. They carried their great from into the knockout stage, dismantling Germany 5-0 before losing the final to Sweden on penalties.

Coach: Ex-Porto and Sporting Lisbon full back Rui Jorge is the man in charge. Jorge boasts significant international experience, having made 45 appearances for his country, including their ultimately unsuccessful run to the final at Euro 2004. He was in charge of the side at last year’s U/21 European Cup, and will be hoping to go one better in Brazil.

Key Players: Udinese midfielder Bruno Fernandes looms as Portugal’s main man. The 21 year-old has spent the last three years plugging away in Serie A and has firmly established himself as an important part of Udienese’s first team. The fleet-footed central midfielder is one-to-watch and a good tournament could well and truly put him in the shop window for Europe’s biggest clubs.

Liverpool’s Tiago Ilori may not have established himself in their first team set up yet, but he will most likely start at the heart of defence for Portugal. After experiencing difficult times with Granada, Girondins Bordeaux and Aston Villa, the centre back will be desperate to use the tournament as an opportunity to sell himself to potential suitors. Tall, imposing and strong in the air, he’ll be pivotal to Portugal’s chances.

Verdict: Should tussle with Argentina for top spot in the group, and need a good result against them in the opening match to do so. If they can’t do that, they’ll most likely face Germany in the Quarter Finals, something to be avoided if possible. However, their performance at last year’s Euros should give them confidence.

Road to Rio: After overcoming Sierra Leone 2-0 on aggregate, Algeria entered the U/23 African Cup of Nations with confidence. There, they went through a tough group of Egypt, Mali and Nigeria undefeated, before victory over South Africa in the semi-finals secured their place at the Olympics. Despite losing to Nigeria in the final, their ticket to Brazil was more than enough consolation.

Coach http://gty.im/460262344
Swiss coach Pierre-Andre Schurmann is the man in charge of Algeria. After a lengthy playing career in Switzerland, his native country served as an ideal introduction to coaching for Schurmann. He knows youth football, having spent eight years in the Swiss setup. Since he started with Algeria in 2014, he has proved to be a success, guiding them to their first Olympics since 1980.

Key Players
Their captain Oussama Darfalou is one player Honduras will look to as a difference maker in Brazil. The striker leads from the front and scored an important goal against South Africa which helped Algeria qualify. With a good record at youth level, expect him to shine in Rio.

Sporting Gijon midfielder Rachid Aït-Atmane is Algeria’s main man in the middle of the park. Having made 37 appearances for Gijon over the last two seasons, he is firmly ingrained in their squad. Comfortable both going forward and defending, the lynchpin should be key to Algeria’s chances of progressing.

Verdict
With a tough group, they need to ensure they beat Honduras and then avoid defeat to either Argentina or Portugal to have any hope of qualifying for the next phase. Boasting less firepower than their opponents, it could prove to be a tough ask. Don’t expect them to make it out of the group.

Road to Rio
Honduras made the cut in comprehensive fashion. After a strong showing early in the tournament, they reached the semi-finals of the CONCACAF qualifiers, where they met the USA. Despite playing in the US, Honduras stunned the heavily-favoured Americans 2-0 to qualify for their third straight Olympic Games.

Coach
Head coach of the senior side, Columbian Jorge Luis Pinto will take the reins at the World Cup. With a glowing CV including spells in charge of Columbia and Costa Rica and the 2014 CONCACAF Coach of the Year Award, he’s more than equipped to lead the Hondurans into battle in Rio.

Key Players
Alberth Elis played an integral part in Honduras’ qualification for Rio. The striker scored twice in their 2-0 win over the USA in Salt Lake City to secure a place at the Olympics. Elis has already made his debut for the senior side, scoring three goals in 10 appearances and turning heads along the way.

Entering the tournament with a wealth of experience, Johnny Palacios will marshal Honduras’ defence. One of their overage players, the 29 year old centre back has made 31 appearances for the senior side and his calmness at the back will be invaluable to the young side.

Verdict
It’ll be a tough ask to qualify and on the surface it seems they’ll be scrapping with Algeria for third place in the group. However, their surprise victory over the US to earn qualification shows they’re liable to causing an upset and a positive result in the opening game against Portugal could set them up nicely for the rest of the tournament.

0
Adelaide United have ended their four-game winless streak by extending their winning streak against the Melbourne Victory with a 1-0 at Coopers Stadium on...
Read more

0
For the past week, Perth has been abuzz with talk about the prospect of Zlatan Ibrahimović jetting in to sign with the Glory. It made...
Read more
Adelaide United

0
The FFA Cup Final and the Sydney Derby have reignited the A-League's fire to ensure the 2019-20 season has started with a bang. Recently, the...
Read more
Hyundai A-League

Perth once again on the brink of glory, but question marks linger

0
Perth Glory begin the A-League season as one of the favourites for the toilet seat, but can they overcome the on-field issues which could...
Read more
Podcast

0
Episode twelve of The Football Sack’s Podcast For Russia 2018 is now streaming on iTunes and Podbean! A big thank you to everyone who listened...
Read more