A new study has found a direct link between player skill level and boot colour on the football field.

Research completed in the UK suggests that pulling on bright pink boots will increase a player’s ability by up to 28 percent. 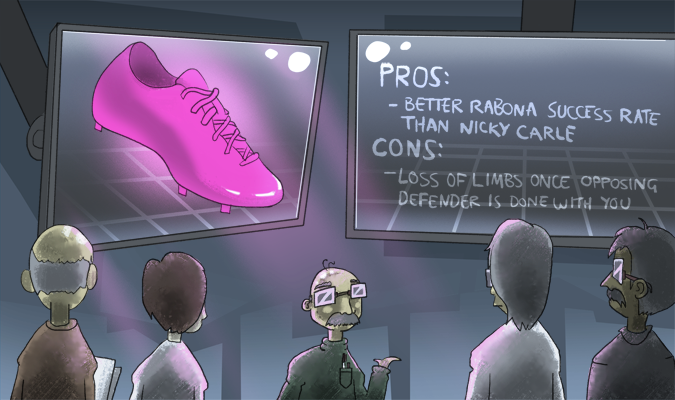 Former semi-professional player and research consultant Dr Neil Fitzpatrick said the results come as surprising evidence for the increasing shift away from the traditional black boots.

“There was a time when players wouldn’t dream of wearing pink boots for fear of getting flogged,” explained Dr Fitzpatrick.

“Bright coloured boots are a magnet for a pissed off centre back.

“It’s similar to waving a red cape to a bull, studs are gonna fly and someone is going home in an ambulance.

“But the way players get to prance around now you can get away with it, you can’t chop people down like you used to.”

Players wearing black boots on average executed 34 percent of attempted rabonas, while those wearing pink boots netted a remarkable 78 percent of the time.

But the research isn’t all good news and Dr Fitzpatrick warned park footballers not take the decision to swap to Nike Mercurials lightly.

“We found that while pink boots do increase your skill level significantly, in almost every instance pretentiousness and propensity to backheel skyrocketed,” he explained.

“At the same time wearing pink boots leads to isolation as players frequently refuse to shower after the game and almost never participate in post-match social activities.

“Our research failed to find a single occurrence where someone who wears bright pink boots bought the post-match case.

“My advice is if you want to be hero buy pink boots, if you like having mates stick with your Copas.”