The best A-League XI of all time (on paper)

Whether you were in a meeting, in the restroom or getting intimate with a lover, we’ve all been guilty of fantasising about an ultimate XI at particular times.

Although some of the players below were slightly (or enormously) past their best, seeing the ilk of players that have graced the A-League is certainly impressive.

Adopting an outrageously offensive 3-4-3 formation with a diamond midfield, to say this squad is not short of attacking options would be the biggest understatement since Kevin Muscat admitted he might be in a spot of bother following his challenge on Adrian Zahra.

GK – Thomas Sorensen
The big Dane amassed over 400 premier league appearances and a century of international caps but his undoubted greatest achievement was being able to ‘get it done’ on a cold, wet Wednesday night in Stoke.

CB – William Gallas
A quick, aggressive and versatile defender, Gallas formed formidable partnerships with Marcus Desailly and John Terry at Chelsea before playing a pivotal role in Frances’s run to the World Cup Final in 2006.

CB – Aaron Hughes
With over 350 premier league appearances and an International career that culminated at the age of 36 at Euro 2016, it’s not hard to see why Hughes is held in the highest regard in his native Northern Ireland.

CB – Patrick Zwaanswijk
Size, leadership and exceptional intelligence were all features that enabled Zwaanswijk to guide the Central Coast Mariners to a 2012 title after successful spells with FC Utrecht and NAC Brada in Holland.

CDM – Luis Garcia
Deployed as a central midfielder for the Central Coast Mariners, the Spaniard was mainly utilized as a winger or attacking midfielder which is exactly where he featured when winning the Champions League with Liverpool in 2005.

RM – Alessandro Del Piero
Legend of the Old Lady, the Azzuri and arguably most prestigious the Cove, Del Piero won six Serie A’s, the Champions League and the 2006 World Cup before gracing the A-League for two seasons with Sydney FC.

CAM – Dwight Yorke
A key member of the Manchester United team that won the historic treble, Yorke proved to be a class above down under winning the Premiership and Joe Marston medal with Sydney FC before casually returning for the premier league for further two seasons.

LM – Damian Duff
Former teammate of Gallas at Chelsea the Irishman won the Premier League twice with the Blues using his immense pace and skill to extend an international career that finished in 2012 with 100 caps.

RF – David Villa
Glimpses of class were shown in Villa’s short spell at Melbourne City but his finest work took place at Valencia and Barcelona with the Spaniard an important part of what some may call the greatest club side the game has ever seen.

LF – Robbie Fowler
Known as “God” by Liverpool’s ever adoring Kop, Fowler was a natural goal scorer who found the score-sheet with regularity at almost every club he played for including North Queensland Fury and Perth Glory.

CF – Romario
Touted by legendary coach Guus Hiddink as one of the greatest finishes the game has ever seen, the Brazilian world cup winner played four games for Adelaide United in the A-League’s inaugural season in search for his dubiously publicized “1000th goal”.

What do you think?
Do you agree or disagree with the side? Maybe Kewell, Bosnich, Broich or Heskey should’ve got a run. 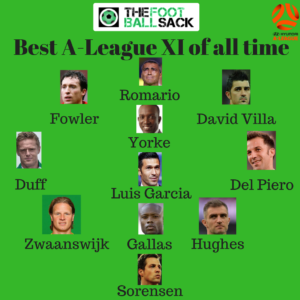